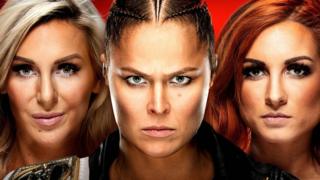 A women's match will be the main event of WrestleMania for the first time in history, WWE has officially announced.

Charlotte Flair and Becky Lynch will battle champion Ronda Rousey for her Raw Women's Title in the final match of WrestleMania 35.

The three women have been part of a huge rivalry over the last seven months that has captured the imagination of WWE fans.

The secret to Finn Bálor’s entrance

Can Ayshah become a superstar wrestler?

WWE: The Miz and Charlotte Flair answer your AWESOME questions