Mueller report: No evidence Trump colluded with Russia to fix US election 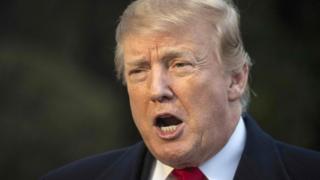 US President Donald Trump did not work with Russia to fix the 2016 US election, says a new report.

In a summary of Special Counsel Robert Mueller's report, Attorney General William Barr says: "The special counsel did not find that any US person or Trump campaign official conspired or knowingly coordinated with Russia."

A summary of the report's findings by Mr Barr was published on Sunday, but the full report has not been released.

Read on to find out more about what's been going on.

Know your US politics

Congress? Primaries? Senate? Know what all the words mean

What are mid-terms and why are they important in the US?

Find out more about US gun laws

Mueller's report: What is it and why was it done?

There have been accusations across the first two years of Mr Trump's presidency that his team worked with Russia to influence the outcome of the 2016 US election, to help Mr Trump to win.

An investigation has been carried out to find out whether or not this was true. A former director of the FBI called Robert Mueller was asked to lead the investigation.

A summary of his final report has now showed that investigators found no evidence of conspiracy or collusion with Russia by Trump's administration. 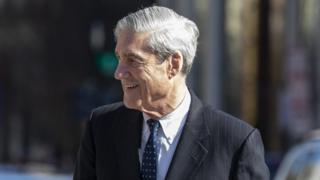 Some people who worked with Trump have been charged with other offences that were discovered during the investigations, but these were not to do with working with Russia.

The report did say that there were "multiple offers from Russian-affiliated individuals to assist the Trump campaign".

But that there was no evidence that Mr Trump's team accepted these.

How has Mr Trump reacted?

Speaking at Palm Beach International Airport in Florida, the US president commented on the findings, saying: "There was no collusion with Russia. There was no obstruction... It was a complete and total exoneration."

This contradicts the report which says: "While this report does not conclude that the president committed a crime, it also does not exonerate him."

"It's a shame that our country had to go through this," said Mr Trump.

He called the investigation "an illegal takedown that failed".

How has Russia responded?

Russia has always denied being involved in hacking to influence the outcome of the US election.

Kremlin spokesman Dmitry Peskov mocked the accusation that the US and Russia had colluded, saying: "I recall the words of the Chinese philosopher who said that it's hard to find a black cat in a dark room, especially if it's not there."

What do Mr Trumps supporters say?

His supporters are pleased with the result of the report, with some saying this could boost his chances of being re-elected as president next year.

Republican Senator Lindsey Graham described it as a "great day for President Trump and his team".

"Now it is time to move on, govern the country and get ready to combat Russia and other foreign actors ahead of 2020."

Republican Senator Mitt Romney called it "good news" and said it was now "time for the country to move forward".

What do people opposed to Mr Trump say?

Those who are against Mr Trump are not happy as many of them want to see the full report by Mr Mueller. So far, they have only seen Mr Barr's summary, which does not not conclude whether or not Mr Trump obstructed justice.

People have also been critical of Mr Trump saying that he has been completely exonerated, as this is different to what the report says.

Trump critics also highlight that the report says that it "did not establish" evidence (i.e. they couldn't find any); not that there wasn't any or that collusion didn't happen.

"Mr Barr's letter 'raises as many questions as it answers'." 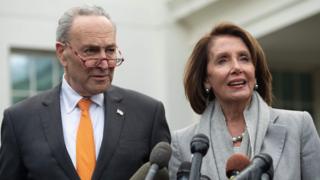 AFP/Getty Images
US Speaker of the House Nancy Pelosi and Senate Democratic Leader Chuck Schumer have released a joint statement about the findings of Mr Mueller's report
What happens now?

It is expected that there will now be a big debate over whether or not the full report should be made public.

BBC North America editor Jon Sopel explains how people "will want to see why Robert Mueller felt he couldn't exonerate the president on obstruction of justice".

"Remember, obstruction of justice is one of the 'high crimes and misdemeanours' that can lead to impeachment," he says.

There are other investigations still going on into Mr Trump's actions around the election.

What has Article 50 got to do with all of this?

What's being done to help people affected by Cyclone Idai?