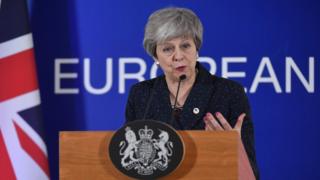 On Thursday night, after eight hours of discussions, European Union (EU) leaders agreed that the UK can delay Brexit, but there are certain conditions.

Up until now, the UK had been set to leave the EU next Friday, on 29 March. Now, there are two new dates offered by the EU that you need to know about:

Mrs May is now on her way back from Brussels hoping to persuade MPs to approve her deal next week.

Why are we talking about something called Article 50?

Theresa May: You've had enough of Brexit

Why did the Speaker of the Commons get involved?

She has said that MPs have "difficult jobs to do" and now have a "clear choice", on which they are expected to vote next week.

"I hope that we can all agree we are now at the moment of decision. And I will make every effort to ensure that we are able to leave with a deal and move our country forward," said Mrs May.

The next big moment will now be when MPs vote on Mrs May's deal for a third time. Parliament has not set a date for this yet, but it is due to be next week.

While the UK cannot delay Brexit any longer without the agreement of EU leaders, many members of the public are pushing for the government to revoke - or cancel - Article 50 as a way to stop the UK from the leaving the EU without a deal. Article 50 is the name of the legal process by which the UK will leave the group. 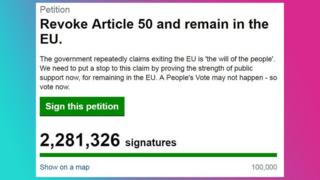 petition.parliament.uk
Over 2 million members of the public have signed a petition calling for the government to revoke Article 50

By 6:30am on Friday morning, well over 2 million people had signed a petition calling for the government to do this.

But for many others, including the prime minister, revoking or cancelling Article 50 - and effectively cancelling Brexit for the time being - would go against the result of the referendum in the UK voted for in June 2016. It could also be seen as politicians admitting that they've given up on finding a solution to the disagreements.

In a press conference, Mrs May referenced the petition, saying: "We didn't say, 'tell us what you think and we'll think about it'. We said, 'here's the vote, what is your decision and we will deliver on that'."

The story of Brexit

Dec 2018: Theresa May wins vote to keep her job

Mar 2019: What happens next? Here are 7 possible outcomes

Brexit: How to stop adults arguing over it

Charity tells kids to reduce screen time and get active

Your messages on Thank a Teacher Day