Why are oysters so important to UK seas?

These oysters are taking an epic journey.

They're going from Loch Ryan in south-west Scotland down to Spurn Point in Humber in Yorkshire.

The journey takes 6 hours and 200 miles but why do they have to move?

Well the Humber used to have lots of oysters of its own but with too many being caught, they've now become almost extinct in this part of the country.

But the shellfish play a vital role in keeping the water clean.

Why are oysters important?

When oysters feed they take in nutrients like nitrogen, absorbing it into their shells and tissue.

While nitrogen is an essential nutrient for plants and animals, too much of it leads to a growth in algae, which can overwhelm and reduce oxygen levels in the water. 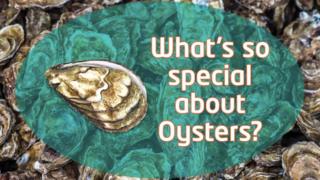 So when the Oysters reduce these nitrogen levels, they're actually improving the water quality so other fish and sea creatures can live there too.

It'll be a few months before scientists will be able tell if the oysters here have made an impact - with this special robot camera taking a trip down to the seabed to keep an eye on things.

Let's hope they little guys settle into their new home quickly and get down to work!