Bear Grylls: You'll be able to control the adventurer in his new show

Have you ever wanted to change the plot of your favourite TV show? Now, TV companies are letting you do it.

Netflix has just announced that it's releasing a new Bear Grylls adventure programme, where viewers will be able to control what he does.

It follows a string of programmes where the viewer is firmly in the driving seat.

Netflix Vice President, Todd Yellin, has promised that there's more to come in the next year or two.

So what programme would you like to see being made into an interactive adventure? Let us know in the comments below.

What is an interactive programme? 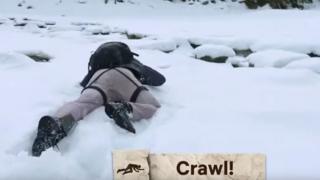 An interactive programme is where the viewer takes part in deciding what happens next in a TV programme.

In an interactive programme, the viewer is given two options to decide between. Like in a video game, this determines where the story goes next.

CBBC has already done several shows where viewer input has affected what happens next including "Secret Life of Boys" and "Dixi".

Netflix has also done a few interactive programmes including one called Puss in Book: Trapped in an Epic Tale.

What's the Bear Grylls programme going to be about?

In 'You vs. Wild', Bear Grylls will let viewers follow along with him on adventures around the world as he tries to survive in the great outdoors.

Viewers will be able to choose Grylls' decisions in each episode and see how they play out.

For example, in the first trailer for the programme, it shows how viewers can choose between Bear crawling and walking through snowy terrain.