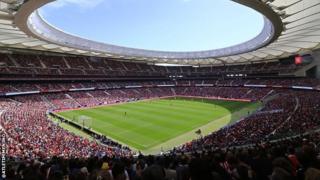 A crowd of 60,739 people watched Barcelona beat Atletico Madrid at the Wanda Metropolitano Stadium in Madrid, Spain this week.

It's the largest crowd to ever watch a women's football match, beating the record of 53,000 people set nearly 100 years ago.

The previous record was made when Dick Kerr's Ladies played St Helen's Ladies on Boxing Day in 1920. They pulled in a crowd of 53,000 at Everton's Goodison Park.

Since that 1920 record, the game of women's football has gone through some highs and lows.

More on girls in sport

On 5 December 1921, the Football Association effectively banned women from playing. They said at the time "the game of football is quite unsuitable for females and ought not to be encouraged".

The ban lasted for 50 years, but since then the women's sport has been going from strength to strength, with stadium crowds increasing and the game getting more popular.

So we've been taking a look at some of the record breakers of the game. 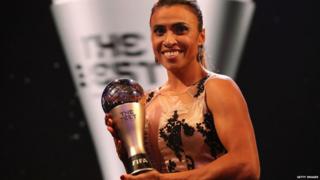 Marta Vieira da Silva - known as just Marta - is a Brazilian superstar footballer, who has won the Fifa World Player of the Year award five times.

The Brazilian athlete, who is considered one of the greatest female footballers of all time, plays forward for Orlando Pride in America's National Women's Soccer League and also as a forward for the Brazil women's nation team.

At the 2007 Women's World Cup, Marta won the Golden Boot for top scorer after netting seven goals during the tournament in which Brazil were runners up.

Marta is also an Olympian. She helped Brazil to take home silver medals at the 2004 Athens and 2008 Beijing Olympic Games. 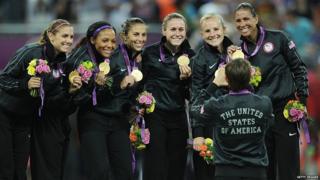 Getty Images
Team USA at the 2012 Olympics in London

America's women's football teams are doing quite well for themselves!

The teams there tend to pay their players a lot more money than other leagues around the world, and the US national team have been crushing it in competition.

Team USA have won the Fifa Women's World Cup three times since it was first established in 1991.

They have also won four Olympic gold medals since the sport was introduced to the Games in 1996. 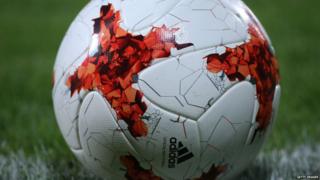 While the sport of women's football has been going from strength to strength, many people think more needs to be done.

Female footballers on average still earn a lot less than the men.

According to the financial magazine Forbes, in 2018 Lionel Messi was the highest paid football player in the world earning many millions of dollars, but the highest paid female player would be lucky to reach one million dollars a year and most earn far less.

That's compared to an average Premier League salary of more than £2.6 million a year, according to the annual Global Sports Salary Survey.

Women's sport 2019: What to look out for this year

World Cup 2019: England Lionesses get a kit made from recycled plastic bottles