The trailer for Avengers: Endgame has just been released and fans are understandably pretty excited.

Perhaps none more so than basketball star Spencer Dinwiddie, who has asked for the league to organise a day off on 26 April - the day the film is due to be released in the US.

Posting on Twitter, he wrote: "I AM OFFICIALLY PUTTING IN MY REQUEST! NO PLAYOFF GAMES ON THE 26th, NATIONAL HOLIDAY...Unless I see it early @Marvel / @MarvelStudios 😁".

Why is he worried? 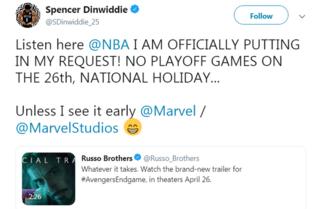 Spencer Dinwiddie plays for a team called the Brooklyn Nets, who are currently in sixth place in a mini-league called the Eastern Conference.

How well do you know the NBA? Take our quiz to test your knowledge.

The Nets are likely to be playing in postseason, which begins on 13 April - just 13 days before the release of Avengers: Endgame. 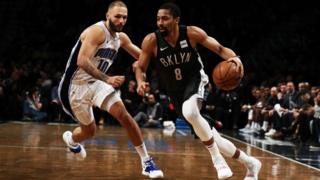 If the team's success continues, they could find themselves playing during the final week of April.

While this would be great for the team, it could mean Dinwiddie - one of the team's star players - can't watch the film on release day along with other die-hard fans.

Maybe if the NBA schedulers don't take pity on him, Marvel will and let him have a sneak preview!