Eco-friendly: Five ways people are trying to help the environment by cleaning up waste 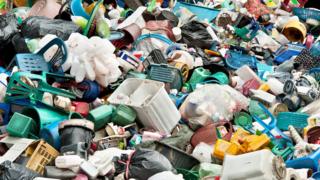 Rubbish, waste, pollution - it comes in all shapes and sizes and from lots of different sources.

And the task of working out how to deal with it is a big one.

But from big companies to individual school children, lots of people are doing trying to find new ways to tackle the problem.

Let us know what you and your school are doing by leaving a comment below or asking your teacher to send us an email: newsroundschools@bbc.co.uk

Here are five ways the problem of waste is being tackled.

Ivy was so fed up with treading in dog muck on her way to school she decided to come up with her own solution.

With the help of her mum she created poo bag dispensers and has attached them to lampposts near to where she lives.

So when people are out with their dogs, they have no excuse not to clean up after their pets - the bags are right there!

In Devon, on the south coast of England, waste in the harbour is being cleared up by a robot!

Well not a robot with hands and legs, but a small boat-like device which collects waste along its path in the water and recycles the plastic it picks up.

The craft has been launched by WWF and Sky Ocean Rescue to help get plastic out of the waterways, seas and oceans.

It's been tried out in other countries already, but Devon is the first place in the UK to use it.

Recycling at school is a great way to tackle waste.

Meet the eco warriors - at their 'eco school' they've found lots of different ways to care for their environment.

From recycling plastic to thinking of ways to get more from the leftover food in their canteen, they are doing their best to tackle the problem.

Scaling things up - meet the team hoping to clear up plastic waste from the Pacific Ocean.

Their idea is a gigantic U-shaped tube that floats on the water, with a barrier hanging under the surface, which they hope will gather plastic rubbish and then take it away.

Some conservationists however are worried that it could harm some sea life in the area.

It's an idea that's still being tested out but if successful could gather huge amounts of plastic that's already in our oceans.

What about the pollution in the air? In February scientists from Australia said they'd made a big step forward.

They've found a way to turn the gas carbon dioxide into solid "coal" which could help remove it from the atmosphere.

Current carbon capture methods aren't used much because they can be expensive and there are other possible risks to the environment.