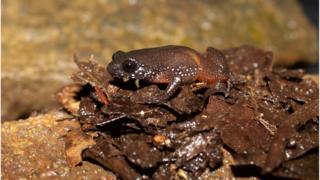 A new species of frog has been discovered in an Indian Mountain range.

It's called the 'starry dwarf frog' and its closest relative became extinct over 10 million years ago.

The frogs were discovered by a group of researchers when they were exploring the Western Ghats mountain range.

The researchers spotted the camouflaged frogs on the forest floor, but the shy frogs were quick to hop away when they realised they'd been spotted! 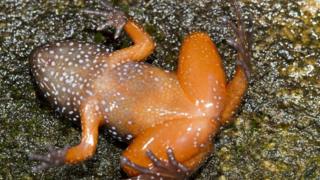 The researchers have nicknamed them starry dwarf frogs because they're around the size of an adult's thumb, have an orange belly, a brown back and are covered in white spots.

The name Astrobatrachus comes from its galaxy like back and Kurichiyana comes from the local people in the area where they were discovered.

The researchers first found the frogs in 2010, but recently had a closer look and were shocked when they realised the starry amphibian's closest ancestor became extinct tens of millions of years ago!

It's possible that there are other species, like the starry dwarf frog, that we still don't know exist!

Romeo the frog finds his Juliette

Seven new species of frogs have been discovered