Sir David Attenborough has written to a primary school who've decided to ditch Comic Relief red noses because they are made out of single-use plastics.

Pupils from Fourlanesend School, in Cornwall, believe that Red Noses are contributing to the growing plastic pollution of the oceans, as highlighted by Attenborough in his Blue Planet programme.

Sir David praised them for raising the issue and for asking Comic Relief about how the noses are made.

Comic Relief say the Red Noses are made to be kept as "cherished toys" and can be recycled at supermarkets.

The school is still raising money for Comic Relief but pupils will paint their noses red instead of wearing plastic ones.

Why are they campaigning? 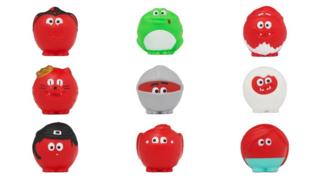 In a letter to the organisers of Red Nose Day - Comic Relief - the pupils said they'd been 'outraged' over plastic pollution in the world's oceans, as highlighted by David Attenborough's Blue Planet 2 programme on the BBC.

The pupils were helped to write the letter by their teachers and in the letter they said: "We find it surprising that the BBC is still marketing red plastic foam noses. They are essentially just another form of single-use plastic, which will probably be worn for one day only before ending up in landfill. Even worse, they could end up as a litter in the environment." 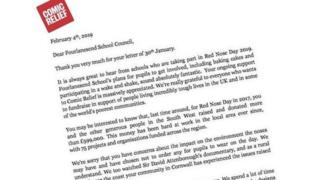 Here's a copy of the letter Comic Relief sent in response

Comic Relief replied to the school with their own letter saying that red noses are intended to be kept as 'cherished toys' or they can be recycled at supermarkets.

How did Sir David Attenborough get involved? 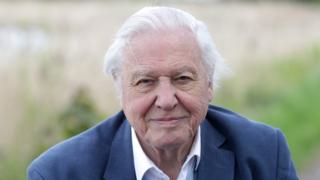 The school also wrote to wildlife documentary maker, Sir David Attenborough, to tell him about their campaign.

He responded with a hand-written letter saying that he supports any efforts to replace plastic products where possible. 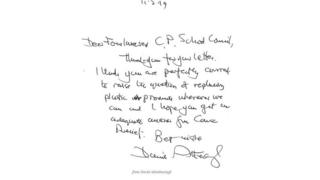 David Attenborough replied to the school with a hand written letter

Thank you for your letter. I think you are perfectly correct to raise the question of replacing plastic products whenever we can and I hope you get an adequate response from Comic Relief.

The head teacher of Fourlanesend Community Primary School, Rebecca Norton, said she was delighted to get a response from Sir David.

She told Newsround, "The campaign teaches children that they have a voice, they can be heard and they can make changes in the world. I don't think we'll see a single-use plastic red nose ever again."

Mrs Norton also said that other schools around the UK have decided to ban the plastic red noses on 15 March - Red Nose Day - since hearing about the campaign.

What do Comic Relief say? 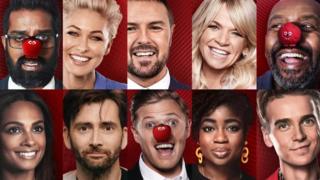 A spokesperson from Comic Relief told Newsround: "Red Noses are collectible, cherished toys that we've designed to be as reusable as possible: we don't want them to be disposed of after a single use so Comic Relief and Sainsburys encourage customers to re-purpose their nose - that may be for a fancy dress accessory, art project or a game.

"We are happy to hear from the public on ways that we can improve the takeback scheme for customers who do not wish to keep the nose and other merchandise.

"We encourage feedback that will allow us to review and to make it easier for those who wish to reuse or recycle our products in the future."

You can give your feedback to Comic Relief by using the 'Contact Us' page on their website.

What are you doing for Comic Relief?