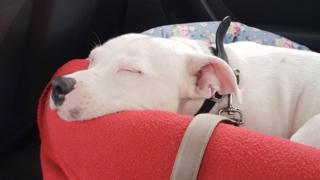 RSPCA
Snoop enjoys a snooze after a busy week

Snoop the dog hit the headlines around the world earlier this year but not for happy reasons.

The Staffordshire bull terrier was caught on security cameras being abandoned at the side of the road in Stoke-on-Trent - only a week before Christmas.

A man was seen unclipping the dog's lead before running back to his vehicle and leaving Snoop behind with just his bed.

The video went viral and made lots of people really angry. But hundreds of people offered to adopt him and now he's got a new home.

Check out these fur-ever fashionable pooches! 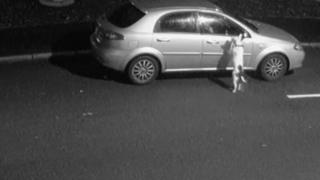 rspca
Snoop caught on security camera being left by his owner

It took a while to settle Snoop down as he was badly affected by what happened.

The animal welfare charity RSPCA is still trying to find the car driver.

Rachel Butler from the RSPCA told the BBC "What happened obviously affected him quite a lot, so we spent a lot of time getting to know him and then Lawrence got in touch with us and he just sounded like the perfect owner for Snoop."

"We found the right home for him. He's got a home for life and that's brilliant." 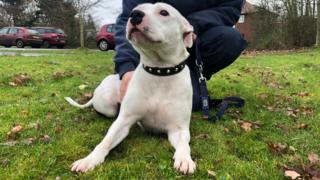 New owner, Lawrence Squire, says he's delighted to have Snoop and says he doesn't think what happened has left any long-lasting effects on the dog.

Let's hope it's a happy-ever-after story for Snoop!