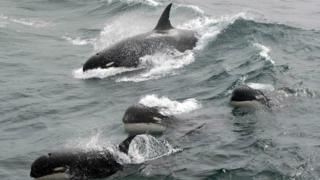 NOAA - JP Sylvestre, South Georgia, 2011
Scientists believe this may be a new species of killer whale

A team of scientists working off the tip of southern Chile in South America think they have come across what could be a new species of killer whale, which has a different body shape and colour pattern.

According to the National Oceanic and Atmospheric Administration (NOAA), the whales have "more rounded heads, a narrower and more pointed dorsal fin, and a tiny white eye patch".

They are also thought to live in offshore waters, in some of the most inhospitable areas of the ocean.

The scientists are now analysing genetic samples that they managed to collect to determine whether or not this is indeed a new species.

For now, the whales are being referred to as 'Type D'.

"We are very excited about the genetic analyses to come. Type D killer whales could be the largest undescribed animal left on the planet and a clear indication of how little we know about life in our oceans," explained one of the NOAA researchers Bob Pitman.

"These samples hold the key to determining whether this form of killer whale represents a distinct species."

Amazing spiders: which is the coolest?

It's not the first encounter with these whales, though. Seventeen of them were seen during a beach stranding in New Zealand 60 years ago, and they have since appeared in tourists' photographs and fishermen's tales.

When they were first encountered in 1955, no whales like this had ever been seen before.

Ever since, scientists have been trying to work out what they were.

In 2010, Pitman and a team of scientists published a report in a scientific journal describing the whales, including photographs that had been taken over the years and details about where they were seen.

Ever since, they have been trying to track them down.

After setting off on an expedition in January 2019, Pitman and his team finally found a group of about 30 of them.

The NOAA reported how the Type D whales "approached the vessel many times".

For now, the science world will be excitedly waiting to see if what comes of the researchers' discovery.

What is whaling and why's it controversial?

Ocean giants having a whale of a time