Koenigsegg: The world's fastest car and other speedy vehicles 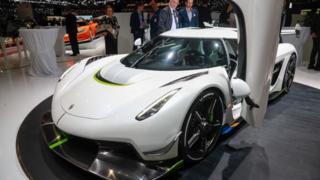 A Swedish car maker called Koenigsegg claims it has developed the fastest car ever.

The company says its new Jesko supercar can go over 300 mph, making it the fastest street legal car around.

While we're on the subject of turbo charged vehicles, lets have a look at some of the fastest vehicles ever...

Blaze: The kid who has run very fast