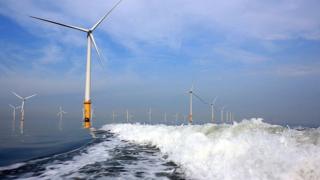 Nearly 30% of the UK's electricity is planned to be generated by wind power by 2030, under a new deal announced by the government.

The move will help the UK towards an aim of getting almost all of its power from low-carbon sources.

The plan will see the offshore wind industry invest £250 million over the next 11 years. The government says it will create thousands of jobs.

Last year, on and offshore wind turbines provided 17% of the UK's energy needs.

Some environmentalists are wondering where the other 70% of the UK's clean electricity will come from.

The government had predicted that 30% of electricity would come from offshore wind, 30% from nuclear and 30% from gas power stations with technology to capture its carbon emissions and bury them.

It is now confirmed that wind will achieve its 30% by 2030, but plans to expand nuclear are unclear. And there isn't a 'gas with carbon capture' plant ready yet. 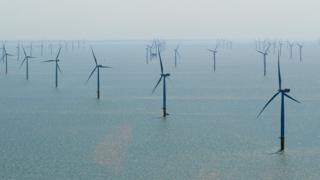 What is wind power?

Wind power or wind energy is the process that uses wind to generate mechanical power or electricity.

Wind turbines convert the kinetic energy - caused by movement generated by the wind - into mechanical power.

This mechanical power can be used for specific tasks (such as grinding grain or pumping water), or can be converted into electricity by a generator.

Offshore wind has become an increasingly affordable source of clean energy in the UK.

UK students walking out of school over climate change