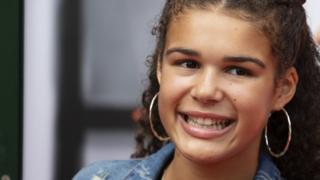 More and more people in the UK are mixed race, including famous celebrities like Meghan Markle and Zayn Malik.

In fact, between the years 2001 and 2011 - the last time a survey of the UK, called the census, took place - the number almost doubled.

The next time the census will happen is in 2021 and it's expected there'll be a big increase again.

Have a read and a watch of these young people talking about there experiences and leave us your comments below.

Molly: All of my troubles go away when I dance

What does 'mixed race' mean?

Being mixed race can mean different things to different people.

Usually your parents and/or your grandparents are of different races or ethnicities. Sometimes the terms biracial, dual heritage and mixed heritage are used instead.

It can mean you get to enjoy the best bits of the different countries and cultures that your relatives have roots in, but it can also mean that you might stand out and look different from some of your family members and friends.

Newsround joined up with the BBC's news show for young people in Africa, What's New?, to speak to kids with African heritage and to find out what it's like growing up mixed race.

Tillie enjoys her mixed race identity but she had struggles when she was growing up.

Her dad's from Ghana and her mum's from England.

It's made me tougher and stronger, and want to embrace where I'm from even more.

At school she was once excluded from P.E. for having big hair and some of her friends didn't believe she was mixed race.

But Tillie overcame her struggles and now she embraces her identity, and her heritage, more than ever.

Brother and sister Elouan and Amandine have family from Wales, France and Cameroon.

It means they speak different languages, enjoy different types of food at home and when it comes to football, they have a big advantage when picking which team to support!

His friend said he doesn't like brown people. It made me feel quite sad and upset.

But Elouan also feels like he stands out and feels different to other people.

Their mum is also mixed race and felt she stood out when she grew up in Africa but for different reasons.

Karim lives with his brothers and parents in London.

His father's family is from Morocco and his mum is from Spain.

I can speak Spanish, English, a bit of Arabic and French.

Having family from different places means he can speak many languages and gets to enjoy lots of different types of food.

But it can also mean looking different to his cousins and sometimes feeling misunderstood by people.

Monifa and Naima's dad is from Nigeria and their mum is from England.

When they were very little they lived in South Africa and being mixed race there was a different experience to what it's like now living in the UK.

They'd pass me around as they were excited that there was a mixed race baby with them.

A big part of their life is having hair that's different from most of their friends' hair.

Some people used to touch and play with it and though it used to irritate Monifa at first, now she doesn't mind as much.