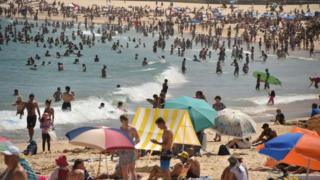 Australia has experienced its hottest summer on record, according to the country's Bureau of Meteorology.

Hundreds of individual heat records were shattered across the country over the past three months.

The warm weather, 2.14 Celsius above the normal average, caused bushfires, power cuts and a rise in people being admitted to hospital.

Seven of the world's most extreme weather conditions

How bad was it?

Australia experienced at least five of its warmest days on record in January - the nation's hottest month ever.

Every state and territory was affected, but South Australia, Victoria and New South Wales got the worst of the extreme temperatures.

It come after floods in Northern Queensland, damage to the coral reefs and bushfires. 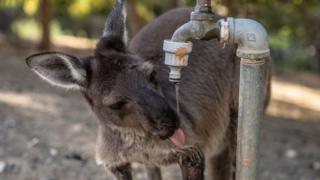 Getty Images
Many species around the country have struggled, with some animals becoming too hot or dehydrated to survive

The severe heat caused issues in other parts of the country too.

An increase in the amount of people using air conditioners to keep cool also led to widespread power cuts across the city of Melbourne.

More than 90 wild horses were found dead or dying in a dried-up waterhole in the Northern Territory.

We've had all sorts - we've had floods in Northern Queensland, we've had fires in Tasmania, we've had heatwave conditions, lots of varied weather across Australia.

How is climate change affecting Australia?

Unusual weather events do happen, and they don't necessarily mean a change in the climate. 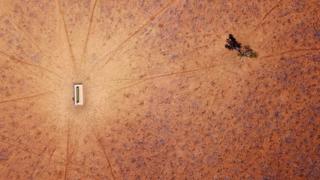 Reuters
A lone tree is the only sign of life near a water trough on a farm in New South Wales in this photo taken in August 2018. Farm owner May McKeown said she had not seen much rain since 2010.

The Australian Bureau of Meteorology's State of the Climate 2018 report said climate change had led to an increase in extreme heat events and increased the severity of other natural disasters, such as drought.

Parts of eastern Australia continue to suffer through their worst drought in recent history.

What is climate change and why are people talking about it?

Hannah Colhoun said: "Weather is what we feel and see every day. If you find yourself asking "What should I wear today? Or "Do I need to take an umbrella with me?" That's you thinking about the weather."

"Climate generally describes the typical conditions that you experience at a location or a region over a long period of time.

"We will always see bushfires and severe weather events, but with climate change, we are going to see more extremes and more intense weather systems," she added. 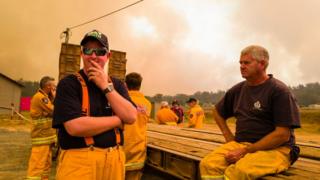 That means Australia, and other countries around the world, might have to do some serious thinking about how we'll cope in the future.

That could mean building cities and transport that can cope with extreme heat or extreme cold, changing where we live, or even re-thinking the time of day that we go to work or school.

Australia floods: People warned about crocodiles and snakes in water