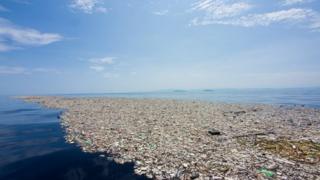 Getty Images
This is a 'trash island' in the Caribbean

The amount of plastics leaking into our oceans must be stopped, or there will be an environmental disaster.

That's the new warning from the world's largest wildlife and conversation charity, the World Wide Fund for Nature (WWF).

In a report, they've called for countries around the world to sign an agreement to end plastics leaking into the world's oceans by 2030.

The WWF's Head of Marine Policy, Dr Lyndsey Dodds, said: "This is a global problem that requires a global solution".

Find out more about plastics:

We want to know what you're doing at your schools to help in the fight against plastic pollution.

So leave us a comment telling us what you're doing or send in your pictures or videos.

If you are talking about it in class, you can email us to newsroundschools@bbc.co.uk

These school kids went to grill the government's top environment minister Michael Gove, to ask if politicians are doing enough.

Almost half of all plastic products littering the world today were made after 2000. 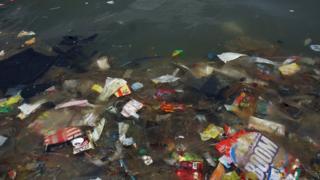 And, over 75 per cent of all plastic ever produced is already waste.

The WWF believe that the United Nations need to act in order to stop there being major issues with the food we eat and the air we breathe.

"Plastic is choking the planet, from emissions caused in its production to the animals harmed when it leaks into our oceans. Nature is not disposable, it is essential - we need it for our health, wealth and security. This is a global problem that requires a global solution. "

The girls grilling supermarkets about plastic