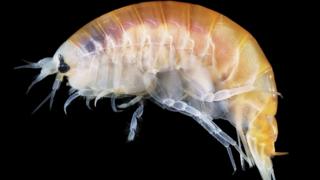 Scientists have found plastic in the stomachs of the deepest marine organisms known to humans.

The findings mean that it's likely there are no areas in the oceans left that are not impacted by plastic pollution.

The researchers from the University of Newcastle were studying the guts of creatures called lysianassid amphipods.

They were collected from the deepest oceans in the world, from Japanese to Chilean waters, 6000 metres under the surface.

6000 metres is equivalent to 2,938 Peter Crouches on top of each other. So that's really deep down.

Despite that, the scientists found plastic and synthetic fibres such as nylon in the stomachs of most of the creatures they studied.

The sea fleas are food for lots of fish and other small predators. This means the microplastics could affect the food chain much higher up than the sea fleas.

Royal Family getting tougher on plastic use

Big meeting to discuss how to tackle plastic pollution