Zebras: Why do they have stripes? 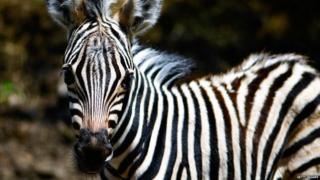 Have you ever wondered why a zebra has stripes? Well, scientists at Bristol University certainly have - and now they think they've found the answer.

They say the black and white stripes may be there to stop flies from landing on the creatures.

Researchers did an experiment in which they put zebra-patterned coats on to the horses.

The researchers now think the stripes dazzle the flies so they can't land properly.

Nine of the world's most famous animals

Check out the world's most pampered pets

Researchers think that zebras may have evolved this way because where they live. In Africa, flies called horse flies carry diseases that may seriously harm zebras so they have developed the stripes to protect themselves.

Zebras are quite good at not getting bitten by flies. They use their tails to bat them away and, when flies do land, they don't stay long because zebras move around a lot. 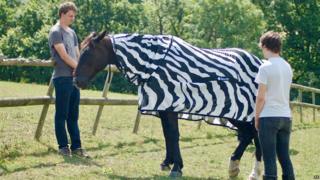 The reason for zebra stripes has been debated for over 150 years.

Scientists have thought that it may be camouflage to hide from predators or even to confuse them, but this has been called into question by some experts.

It has also been suggested the stripes might have a role in communication or controlling the animal's temperature.

In December 2013, research carried out by University of Queensland scientists - published in the scientific journal Nature - said the black and white patterns dazzled and confused predators, especially when zebras move as a herd.

They studied photos and video footage of zebras to test the theory, which suggested the markings make optical illusions so it's hard for predators to focus on individual animals.

What do you do if a zebra escapes from the zoo?

Zebras on the run in Belgium

Tell us what it's been like going back to school

What is Blackout Tuesday?