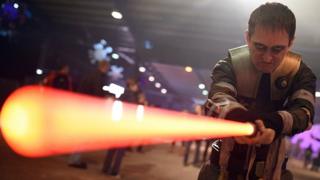 OLI SCARFF
Is the Force strong enough with you to be a lightsaber dualist?

Now fans of fencing in France will be able to swap their traditional blades for lightsabers instead.

LED polycarbonate may not have the cutting edge of their usual weapon, but the news has awakened the Force in Star Wars fans the world over.

The FFF is now equipping fencing clubs with lightsabers and training instructors in the art. 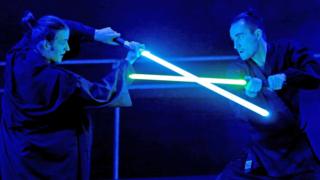 Work up a sweat, you must do

The Federation hope that recognising lightsaber dueling as a legitimate sport might tempt younger potential dualists to give it a go, and get more people working up a sweat in a sport they wouldn't otherwise consider.

"With young people today, it's a real public health issue. They don't do any sport and only exercise with their thumbs.

He says it's becoming difficult to persuade young people "to do a sport that has no connection with getting off the sofa and playing with one's thumbs. That is why we are trying to create a bond between our discipline and modern technologies." 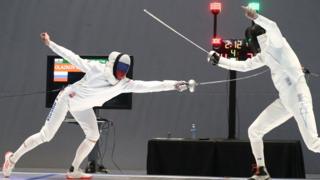 Devin Manky
Fencing works on a points-based system, with points awarded for landing blows to your opponent on different areas of the body

It's not the first time the sport has used popular culture to help attract a new audience to participate. Films like The Three Musketeers and Robin Hood gave the sport a burst of new talent coming through fencing club doors.

"Cape and sword movies have always had a big impact"

"Cape and sword movies have always had a big impact on our federation and its growth," says Aubailly. "Lightsaber films have the same impact"

Give it a try, young people want to it seems...

In much the same way as fencing, lightsaber duels work on a points-based system with an umpire judging, but combatants must strike their lightsabers in a smoother motion, unlike the tip-first strikes of fencing.

Participants fight inside a circle wearing similar protective clothing to their head and body. Strikes to the head or body are worth 5 points; to the arms or legs, 3 points; on hands, 1 point - and the first to 15 points wins.

May the FFForce be with them. And only them. As Master Yoda once said, "Try it at home you must not."