Frozen 2: Everything we know so far

A brand new trailer for Frozen II has dropped, giving us a little more information on the storyline of the hotly anticipated sequel.

In the trailer, we see Elsa and Anna as young children being told about an enchanted forest by their father.

The bedtime story seems to suggest there is more behind the reason Elsa has magical powers.

After we see a strange voice calling out to her, Elsa appears to accidently cause a magical storm in Arendelle. 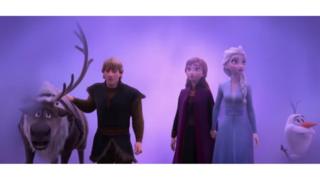 We hear a troll called "Grand Pabbie" telling Elsa to "find who is calling you - they may have answers".

In order to save the kingdom, Elsa, Anna, Kristoff, Olaf and Sven have to embark on a "dangerous but remarkable journey".

The description of the trailer on YouTube teases, "Elsa feared her powers were too much for the world. In Frozen 2, she must hope they are enough".

We see the characters walk through a huge wall of mist, battle dark forces including fire, Elsa riding a "sea horse" and the emergence of some enormous stone monsters.

We can't wait to see what happens!

What did we know already?

Earlier in the year at Disney's D23 Expo, Disney revealed more details about the film at a fan convention in California.

The first trailer which landed in February this year was the most viewed animation trailer of all time, with a record-breaking 116.4 million views in 24 hours.

The footage also showed Kristoff bending down on one knee suggesting that there might be a royal marriage proposal.

When is Frozen 2 coming out in the UK?

The sequel was originally meant to hit cinemas on 27 November before Disney moved the release date forward. 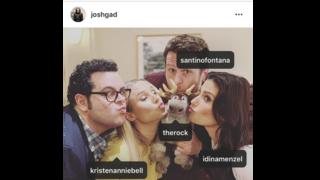 After close inspection of Josh Gad's social media we spotted he tagged The Rock on an Instagram snap of the cast - could he be making an appearance?

Josh also tagged Santino Fontana, although there's no official confirmation that the wicked Prince Hans will be back.

What do the Frozen 2 trailers tell us?

The diamonds are a feature of the third trailer too. 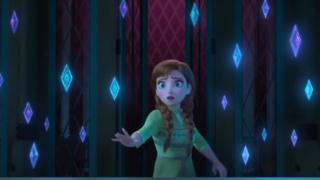 What this could mean? We don't know yet!

Last year, there was a lot of chat about whether Elsa will become Disney's first gay princess, sparked by the online campaign #GiveElsaAGirlfriend.

"I love everything people are saying and people are thinking about with our film," co-director Jennifer Lee said in response.

That it's creating dialogue, that Elsa is this wonderful character that speaks to so many people, it means the world to us that we're part of these conversations.

What do you think about the new Frozen film trailers? Let us know in the comments.

Frozen 2: Which of these real ice castles would get Elsa's seal of approval?

Quiz: How much do you know about Frozen?

Frozen 2: Will Elsa get a girlfriend in new film?