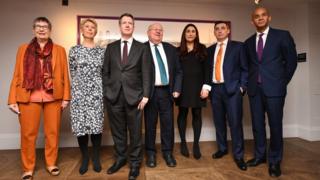 Nine Labour MPs have now quit the Labour Party in protest at the way their leader, Jeremy Corbyn, is handling Brexit and dealing with anti-Semitism.

Eight of the MP's have now said they will work together as part of the Independent group. That group also includes three MPs who left the Conservative Party.

Ian Austin says he will work alone as an independent MP.

They have all spoken to the media to say why they felt they could no longer work for the Party.

Mr Corbyn said he was "disappointed" they felt unable to continue.

Ms Berger said: "This has been a very difficult, painful, but necessary decision."

Why is everyone talking about anti-Semitism?

"We represent different parts of the country, we are of different backgrounds, we were born of different generations, but we all share the same values."

She said Labour had become anti-Semitic and she was "embarrassed and ashamed" to stay. 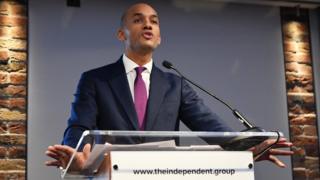 Chuka Umunna said they had taken a step forward, calling for other MPs from Labour, and from all parties, to join them in "building a new politics."

"Politics is broken, it doesn't have to be this way," he said at the event on Monday.

Many of those that resigned are frustrated by the lack of leadership in dealing with anti-Semitism in the Party, and also disagree with Jeremy Corbyn's approach to Brexit.

Mike Gapes believes Jeremy Corbyn should be doing more to tackle the problems in the party, stating:

"I am sickened that Labour is now perceived by many as a racist, anti-Semitic party."

He added that it was "increasingly clear that prominent figures in the Corbyn Labour leadership do not want to stop Brexit".

In a statement, Mr Corbyn said: "I am disappointed that these MPs have felt unable to continue to work together for the Labour policies that inspired millions at the last election and saw us increase our vote by the largest share since 1945."

He went on to say that "now more than ever is the time to bring people together to build a better future for all of us."

He said Labour "must look long and hard at the reasons why the MPs feel they are no longer able to stay in the party."