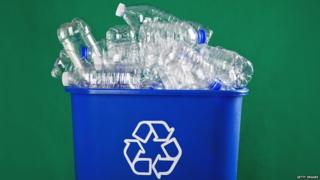 Big shops across the UK have been accused of trying to 'water down' a proposed scheme, to be announced by the government on Monday, to try and change the way we recycle plastic.

Campaigners say large and small drinks containers should have a deposit of more than 15p when we buy them, which you then get back when they are recycled.

But some shops say small "on-the-go" bottles cause the most litter, while large bottles are recycled because they are usually consumed in the home and should not be a apart of the deposit.

We want to hear from you! What do you think of the deposit? Should all bottles take part or should only smaller ones have the deposit added?

Government Ministers are considering whether to include bigger plastic containers in the plan or not have the deposit for them.

How would the recycle scheme work?

The UK proposal, which is a part of the government's Resources and Waste Strategy, may follow similar schemes that have been successful in other countries.

In Norway, the shopper pays a deposit on every bottle - the equivalent of 10p to 25p depending on size.

They drink the contents then posts the empty bottle into a machine which gives them a coupon for the money that they have spent on the deposit.

Why do campaigners think big and small bottles should be included?

Campaigners are angry that the industry is fighting plans to limit deposits to small bottles.

Greenpeace said if the government introduced a "half-baked scheme" limited to smaller bottles only, it would confuse customers and fail to stop millions of large containers being burned, dumped or ending up in the oceans.

And Libby Peake from the organisation Green Alliance said litter wasn't the only issue: "Introducing a deposit on all containers would improve the flow of materials into the recycling stream - that'll be a major plus," she told the BBC. 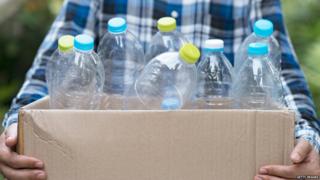 Getty Images
But what do the businesses say?

Andrew Opie, of the British Retail Consortium, said the best approach is to focus on cans and bottles drunk outside the home.

An overall deposit would mean big bottles going into recycling machines rather than home recycling bins, he argued. This would remove a source of money for local councils, because plastic bottles are valuable for recycling.

Ministers have been asking the public and industry what plans they think would work best.

This will last 12 weeks, and the government will later announce what they will do.

What are the hardest things to recycle, and why?