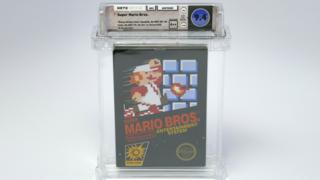 An unopened copy of a Super Mario Bros game has sold at auction for $100,000.

Super Marios Bros originally came out in 1985 on the Nintendo NES console and was really popular.

The game itself was a tester copy, meaning it was sent around to show people what the game play on the NES console would be like.

It's not the first time a game has sold for loads of money at auction.

However, gaming experts say that the Super Mario Bros auction is more impressive because the game wasn't rare at all.

So, if you've got any unopened games knocking about, make sure not to throw them out. They could be worth a fortune in 35 years!

5 of the worst video games ever