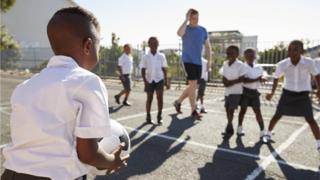 The person responsible for sport in the government, Mim Davies, says exercise needs to be as important as reading and writing in schools.

In her first speech as the Sport Minister, she's said it's really important for kids to build a "sporting habit for life".

She also thinks there's not enough women's sport on the television. At the moment, she believes it's viewed as a bit of a "novelty".

The government says that kids should get at least 60 minutes of exercise each day.

The opposition party, Labour, have responded by saying that the government has cut 35,000 hours of PE from the school curriculum this year.

Is Mim Davies right? Do you think there needs to be more sport in school? And should more female sport be on the TV? Let us know in the comments below...