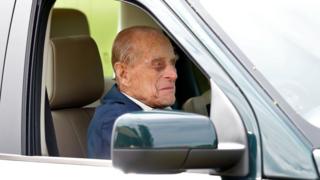 The Duke of Edinburgh is giving up driving, Buckingham Palace has said.

It comes after the 97-year-old duke was involved in a car crash near the Sandringham estate in Norfolk, back in January.

Two days after the crash he was spoken to by police after he was pictured driving without a seat belt.

Buckingham Palace said that he handed in his driver's licence on Saturday. This has been confirmed by the police.

In a statement, the palace said: "After careful consideration the Duke of Edinburgh has taken the decision to voluntarily surrender his driving licence."

BBC royal correspondent Jonny Dymond, said it was the Prince's own decision to give up his licence, and that the prince would have a driver from now on. Getty Images
The Prince arrived in style driven by a chauffeur when he arrives at his grandson Prince Harry's wedding
How did the crash happen?

The 97 year- old had been driving on a road called the A149, close to the Queen's Sandringham estate in Norfolk on 17 January when he was involved in the crash.

One woman, Emma Fairweather, was left injured after Prince Phillip's Land Rover Freelander collided with a her car when he pulled out of a driveway.

The car was being driven by Ms Fairweather's friend at the time.

Prince Philip later wrote a letter to Ms Fairweather saying that he was "deeply sorry" and wished her a "speedy recovery".

The 97-year-old suggested he did not see the car she was a passenger in because of bright sun.

The Crown Prosecution Service, who decide whether to bring criminal charges against people who broken the law, are currently investigating the collision.

It said it would take this latest development into account.

Prince Philip: Duke of Edinburgh is not hurt after car crash