Who is Donald Tusk? 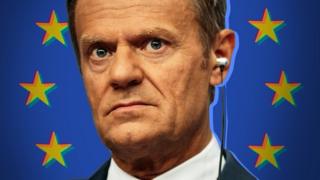 Getty Images
Who is Donald Tusk?

You might have seen this man in the news a lot recently.

Donald Tusk has been one of the most important people in deciding how the UK will exit the EU.

But who is he exactly? And why is is he causing so much controversy right now?

Brexit questions? Our expert gives you the answers

What is the Irish border backstop?

Who is Donald Tusk? 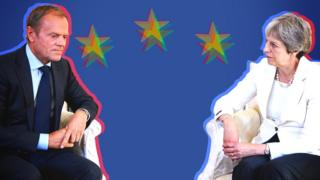 Donald Tusk is President of the European Council.

He's one of Europe's most senior politicians.

He's not voted for directly by the public but is appointed by the European Council which is made up of the leaders of the 28 EU member countries.

Together, they help decide the political direction of the European Union, but it does not make or pass laws.

Before this, Donald Tusk was Prime Minister of Poland for seven years.

Why is he in the news?

Mr Tusk has been working with Prime Minister Theresa May to decide a deal for Britain's exit from the European Union.

However, this work has been very difficult. The deal that Prime Minister May agreed with EU leaders on was rejected by the UK Parliament.

The UK is due to leave the EU on March 29 2019 - and it could be that they leave without a deal if nothing can be agreed.

I've been wondering what that special place in hell looks like, for those who promoted #Brexit, without even a sketch of a plan how to carry it out safely.

Donald Tusk thinks leaving without a deal is bad for the United Kingdom and has said that he believes Brexit is a mistake for the UK, full stop.

Theresa May has been having meetings with Mr Tusk about changing the terms of her deal - especially about how the border between Northern Ireland and the Republic of Ireland will be managed.

She hopes that if that can be changed, she will be able to get MPs to vote for her deal in time fore the March 29 deadline.

But Mr Tusk, so far, says the EU won't change what it has agreed.

This week he took to Twitter, saying that he is angry about UK politicians who campaigned for Brexit but had not decided what Britain's exit deal should be beforehand.

He said he's wondering what a "special place in hell looks like" for those who supported Brexit without "a plan to carry it out safety".

Many people, including many people who support Brexit, are angry at Donald Tusk's comment.

Former UK Brexit Secretary David Davis said in response, "When people throw insults around it says more about them than the people they're insulting."

The European Union is a group of 28 European countries that was created to make trade and travel between the member countries easier.

It has its own parliament, anthem, and a list of rules and benefits for all of its members.

In 2016, the UK voted to leave this group of countries.

To do that they had to work with the European Union to decide how they should leave, and what their relationship with the EU should look like after they have left.

But lots of people have lots of different ideas about what Britain's exit from the EU should be, and what a future relationship should look like.

One of Prime Minster Theresa May's most difficult jobs is working out a way through this complicated issue.