PewDiePie vs T-Series - The battle to be Youtube number one 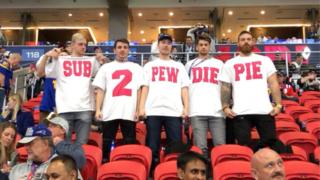 The battle to become the most popular Youtuber has made it as far as the Super Bowl.

During Sunday's final between Los Angeles Rams and the New England Patriots, fans wearing "Subscribe to PewDiePie" t-shirts were shown in the crowd.

Both PewDiePie and his main competitor, T-Series, have over 80 million subscribers on the video-sharing site.

There's only a couple of thousand subscribers between them.

As part of the battle, adverts have been taken out in New York's Times Square and 50,000 printers have been hacked to show messages of support for PewDiePie.

What's different about this 7 Rings video?

Who are PewDiePie and T-Series? 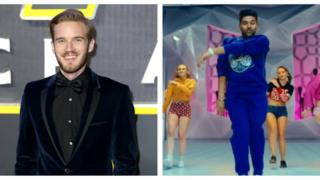 Swedish Youtube personality PewDiePie is currently the most popular Youtuber, with over 80 million subscribers. He mainly records himself commentating on video games.

He is very controversial. In 2017, he used a racist word which is incredibly insulting towards black people whilst live streaming himself playing a game.

He also lost a sponsorship deal with Disney after he was criticised for telling an anti-Semitic joke.

Despite this controversy, the number of people subscribing to PewDiePie has risen by almost five million in the past month. 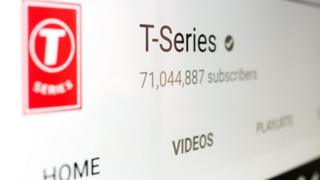 PewDiePie is up against T-Series - a channel which shares daily Bollywood film trailers and music videos.

T-Series is very popular in India, a country which has a population of 1.3 billion.

It has a big team who can put out an average of six videos a day for its subscribers.

What's happened so far in the battle? 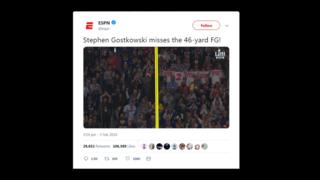 @ESPN
Can you spot the PewDiePie t-shirts here?

Lots of famous Youtubers have got involved in an attempt to help PewDiePie keep his position as number one.

Youtube creator, Mr Beast, who has over 14 million subscribers, bought seats at the 2019 Super Bowl right behind the goalpost so his "Subscribe to PewDiePie" t-shirts would be seen on TV.

In December 2018, Youtuber Justin Roberts paid for a billboard in Times Square, New York in support of PewDiePie. He claims it cost $1 million dollars to do so.

But, at times it's gone too far. At the end of November last year, an anonymous hacker broke into 50,000 printers in order to print out support for PewDiePie. 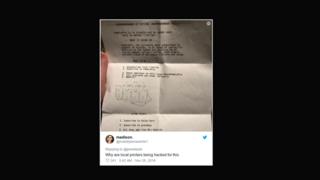 @MADDYBENAVENTE1
50,000 printers were hacked to print out a message in support of PewDiePie

Experts think that PewDiePie will struggle to stay as number one because T-Series averages more viewers each day.