Will there be snow this weekend? 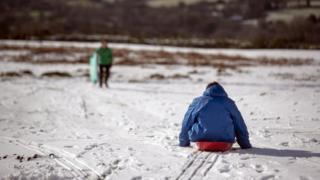 It looks like the UK will be facing more icy temperatures over this weekend!

The snow is now expected to continue to move towards the east coast of the UK over this weekend.

And last night there were even more problems for motorists - with police helping to rescue stranded drivers in the south east of the UK.

Highways England, the people who look after all the roads in England, said that police worked until 2am on Saturday to help drivers stuck near Basingstoke.

Over the past week, heavy snow sweeping eastwards across the UK has disrupted travel and led to many schools being closed.

The south west has been the worst affected, with freezing weather affecting Wiltshire, Hampshire, Sussex and Kent and areas of Wales.

Send us your snowy snaps

On Thursday, round 100 drivers were stuck on a major road in Cornwall, with teenage students at one college in Bodmin having to stay there overnight.

And more than 100 people slept overnight in a pub in Cornwall after heavy snow left them stranded. 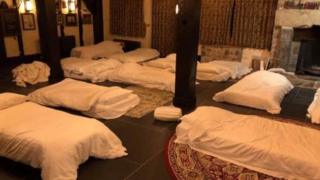 The coldest temperature in the UK so far was in Braemar, Aberdeenshire, where the temperature dropped to -15.4C (6F).

Some weather scientists suggest that the temperature might drop even lower in Scotland over this weekend, to -16C (3F).

All you need to know about snow

Send us your snowy pics!

How to walk on ice without slipping

Snow forecast: What is a weather warning?

Dozens of schools in the county closed on Friday, with schools in Wales closing early.

Snow depths of 12cm (5in) were recorded in Bodmin, Cornwall, the Met Office said.

Parts of Cumbria have seen 8cm of snow, while there was 7cm recorded in Inverness-shire and 5cm in Powys.

There are yellow warnings across the UK over this weekend.

A yellow warning means that you need to watch out for slippery surfaces and cold temperatures! 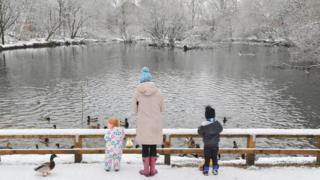 Getty Images
The snow didn't put off Matilda and Oliver from feeding the ducks with their mum in Stalybridge, Lancashaire

The Met Office has warned of dangerous driving conditions in some southern areas, with warnings of rail delays and flights cancellations into Friday morning.

They warn of some snow and say some stretches of road will be icy.

What's the snow story where you live?

Further snow is forecast overnight over this weekend along the east coast of the UK, in Scotland and England.

There are yellow warnings across the UK - meaning you need to be careful out there because of the slippery, icy surfaces and cold temperatures.

Make sure to wrap up warm! 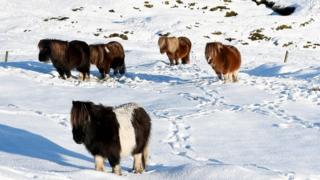 England, Wales and Northern Ireland also recorded their lowest temperatures of the winter so far.

It's snowing! We want photos of the snow where you live

US polar vortex: What's its like in Chicago when it's -30 degrees?