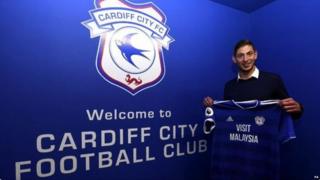 A search for the plane carrying missing footballer, Emiliano Sala, has discovered seat cushions on a beach in Northern France.

It's the first time any trace of the plane has been found.

The Cardiff City footballer has been missing since 21 January after his plane went missing near the Channel Islands.

Police had initially called off the search for the footballer but a private search was started after more than £260,000 was raised.

Sala had signed for Cardiff City in the transfer window and was on his way from France to join the Premier League club.

The Argentine striker, aged 28, was one of two people on board.

Cardiff signed Sala for a club record £15 million after the striker scored 13 league and cup goals for Nantes this season.