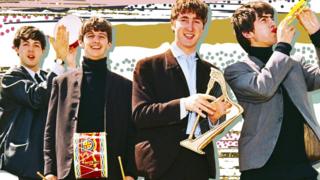 January 30, 1969. On a rooftop in London, Paul McCartney, John Lennon, George Harrison and Ringo Starr performed together live for the last time ever.

At that time, many fans did not know that the 'Fab Four' were coming to an end.

Fifty years later, the band is still considered one of the most successful and important in the history of music.

But why were the Beatles so important? And how do they compare to a modern-day supergroup, like K-Pop superstars, BTS?

The Beatles v BTS: How do they compare?
Who were the Beatles?

Over the next five years, John and Paul's band totally transformed into a new group called The Beatles. They were joined by Paul's friend, George Harrison, on guitar and session drummer Ringo Starr.

In total, they spent 65 weeks at the top of the UK charts!

And for one week in April 1964, the Beatles achieved something that had never been done before - they took the top five best-selling singles in the United States Billboard chart!

But what was so special about this band? 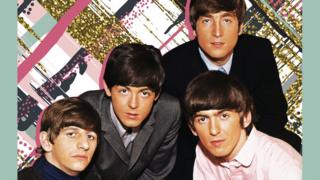 Many people feel that The Beatles were a groundbreaking band.

At first they were mainly influenced by the rock and roll genre of the '50s, but over time they came up with new ways of making music.

Their original ideas went on to influence hundreds of bands that followed them.

And even 60 years on from their creation, they remain one of the world's most popular music groups of all time.

How did the Beatles' change fashion?

The Beatles changed their look over the years and set trends for the millions of fans around the world.

As their music evolved, so did their style. Take a look! 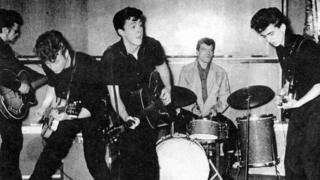 Getty Images
John Lennon, Paul McCartney and George Harrison in Liverpool, 1960 - at this time their style was influenced by '50s rocker Elvis Presley. 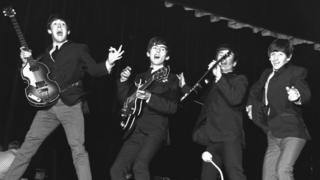 Getty Images
By 1963, the group had been encouraged to wear matching suits and to grow their hair long by their manager, who wanted to give them a 'cleaner' image. 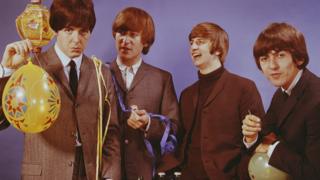 Getty Images
The Beatles still wearing their famous suits in 1964. 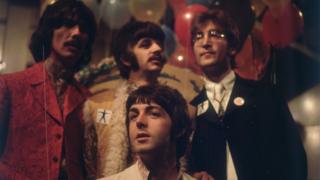 Getty Images
By 1967, The Beatles experimented with their clothes as much as their music - trying lots of different styles over the years. They broke away from their black and white look. 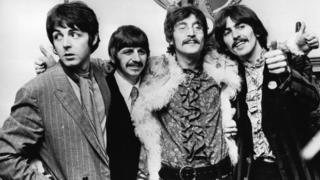 Getty Images
The Beatles celebrating the release of their album - Sergeant Pepper's Lonely Hearts Club Band. This is their best-selling album to date!
What was 'Beatlemania'?

In the 1963, the British public had not seen anything quite like the crowds that The Beatles attracted.

The band's popularity with younger audiences, particularly women, became a big talking point in the UK.

Many older people were horrified at how Beatles' fans behaved - many of them screaming, cheering, dancing and at times they tried to storm onto stage! 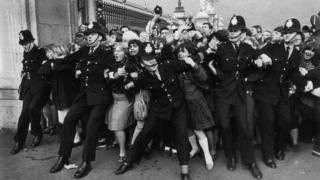 Getty Images
Fans were held back from climbing over the gates of Buckingham Palace when The Beatles received their MBEs in 1965.

This fan mania became known as 'Beatlemania', and it followed the group from the UK to the United States.

There performance on the famous Ed Sullivan show was viewed by 73 million people in 1964.

If you can imagine, that's the same as every person in the UK today tuning in to watch one television programme! 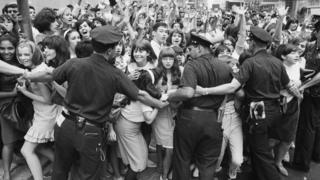 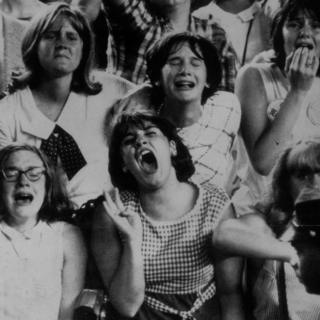 Getty Images
Beatles fans were often so overwhelmed they would cry, scream and cheer throughout the band's concerts. Some even fainted!

Even though the band split up nearly 50 years ago, there are still millions of Beatles fans around the world today.

We wonder how you guys will remember bands like BTS and One Direction 50 years from now!

Let us know what you think in the comments.