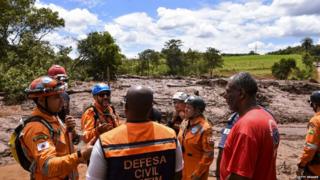 Rescue teams in Brazil, in South America are searching for survivors after a dam collapsed on Friday.

Dams usually act as barriers that stop things like water and waste from entering places where people live and work.

This dam collapsed at a mine near the town of Brumadinho, allowing mud and industrial waste to enter the site.

Many people, most of whom are workers from the mine, are still missing. 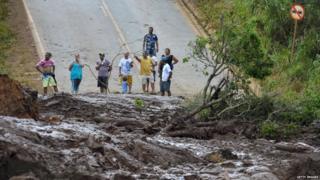 Rescue teams have been trying to help people by making their way through a sea of muddy sludge and using helicopters and earth-moving machinery in the search for survivors.

So far, the sludge has damaged roads and houses where many of the mine workers live. Some people covered in mud have been rescued by helicopter.

Other residents who live close by have been evacuated as a safety measure. 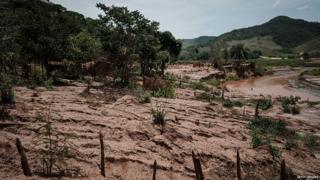 Getty Images
Remains of houses damaged by the flood following the collapse of the Samarco iron-ore mine dam.

Three years ago, another dam in Brazil also collapsed in a place called Mariana.

It was owned by the same company (Vale) as well BHP Billiton.

After a court case, BHP Billiton and Vale agreed to pay around £1.4bn to the Brazilian government.

The house that's a skate park in Brazil