Venezuela crisis: What is happening? 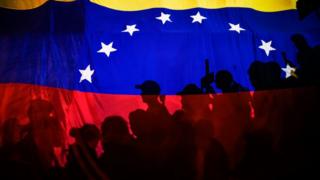 Big protests were held in Venezuela on Wednesday across all 23 of the country's states, according to local media.

They came after violent clashes the day before between supporters of President Nicolas Maduro and the opposition leader Juan Guaido.

The conflict is due to growing tensions over the delivery of important aid and because of a row over who the country's president should be.

Juan Guaido said he had the support of parts of the armed forces and appealed to the Venezuelan people to take to the streets to end the government of President Nicolas Maduro.

But in a TV address, President Maduro said Mr Guaido had failed to turn the military against him.

Mr Guaido has been recognised as acting leader of Venezuela by more than 50 countries, including the US, the UK and most countries in Latin America.

But Mr Maduro - backed by Russia, China and the top of the country's military - has refused to give up leadership to his rival.

Read on to find out more about what's going on and why. 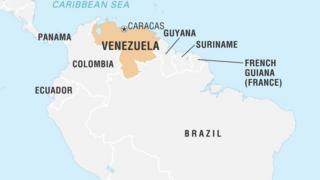 Venezuela is in South America and has a population of 31.5 million.

Oil is the main product that it sells to the rest of the world, but when oil prices fell, the nation began to struggle.

Many people feel they can no longer live in Venezuela and believe the country's money is near-worthless.

Food shortages are widespread, grocery store shelves are bare, and many people say they do not have enough food to eat.

The public health system has collapsed, which means many cannot get the medicine they need.

In total, more than three million Venezuelans have left the country in the past three years.

Who is the president? 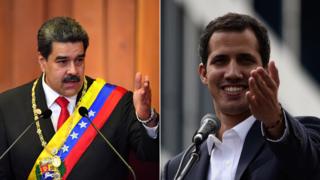 In a typical democracy, it's pretty clear who the president of a country is. He or she wins an election after the population have voted for who they want.

However, in Venezuela the last election was very controversial and lots of people think Nicolas Maduro, who has been the president since 2013, cheated in order to win.

He was re-elected in 2018 but most of the opposition parties didn't take part so now he's now been challenged by a man called Juan Guaido.

Guaido is a very powerful government figure who disagrees with Maduro. He's claiming that because Mr Maduro didn't win the election fairly, the presidency is up for grabs, so he has put himself forward as the new acting president.

While all this has been going on, there have been lots of protests and violence in the streets about who should be the president.

Lots of countries have been getting involved in the dispute. US President Donald Trump has tweeted saying he supports the new acting President Juan Guaido.

More than 50 countries - including Canada, Argentina and Brazil - also support the change.

What happened on Tuesday? 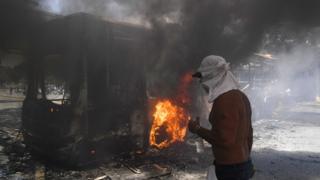 In the early hours of Tuesday, Mr Guaido stood alongside a number of men in military uniform. He announced that he had the support of "brave soldiers" in the capital, Caracas.

Supporters on both sides then gathered in different places of Caracas throughout the day, and there were clashes between Mr Guaido's supporters and armed military vehicles.

Despite what Mr Guaido said in the video, it appeared most of the military stayed on the side of Mr Maduro during clashes.

Tuesday marked the most violent moment of the Venezuelan political crisis this year. Venezuelan health officials said 69 people were injured.

What happened at the Venezuelan border earlier this year? 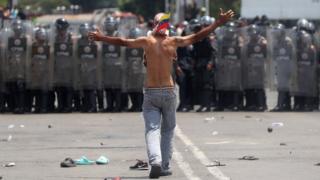 The violent protests in the country have been going on for many months.

Earlier this year, Venezuela's opposition had hoped to peacefully bring aid trucks over the borders with Brazil and Colombia.

Mr Guaido had pledged that the aid would come into the country. In response, Mr Maduro partly closed the country's borders.

Venezuelan civilians attempted to cross in order to get to the stores of food and medicine, but the attempt quickly turned into violent clashes. 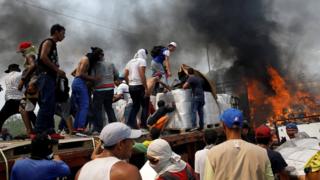 Reuters
Some images appeared to show aid trucks that had managed to pass, being burned

Security forces responded by pushing back and using tear gas to break up groups of demonstrators.

Soldiers also opened fire on civilians and at least two people died in the clashes between the public and troops loyal to Mr Maduro. 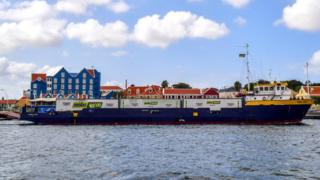 Separately, AFP news agency reported that a boat carrying US aid from Puerto Rico to Venezuela was forced to dock on the small Dutch island of Curaçao after it was stopped by the Venezuelan navy off the northern coast.

The vessel was reportedly loaded with nine cargo containers filled with food and medicine.

Mr Guaido has said that he and his supporters will continue demonstrations every day "to achieve freedom".

"We are on the right track, there is no turning back," he said, promising strike action starting today.

An emergency meeting of the Lima Group of Latin American countries - a group set up in 2017 with the aim of helping to find a peaceful solution to the situation in Venezuela - is due to take place on Friday.

Venezuela crisis: Why are thousands of people fleeing every day?