Young people across Europe have been skipping school to march in protest about climate change.

Teenagers and school kids are demanding that politicians take action before it is too late. We spoke to some young people in the Belgian capital Brussels about why they are protesting.

Their protest is inspired by 16-year-old Swedish student Greta, who performs a school strike every Friday to protest in front of the Swedish parliament.

Protests have been taking place since last week in many European cities and as far away as Australia. 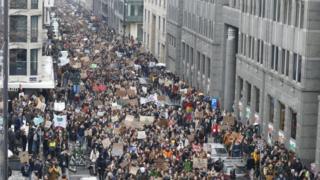 NICOLAS MAETERLINCK
Student strike action, organised by 'Youth For Climate', urging pupils to skip classes to protest about a lack of climate awareness

In Belgium alone last week, the protest movement numbered around 12,000 young people, all participating in a school strike.

According to police on Thursday, that figure increased to an estimated 35,000 young protesters.

What do we want? Climate Justice! When do we want it? NOW!

Those that are marching say it is important that they are there to demonstrate against the country's climate policy because "the protest is important to our future".

"We want to show that youth has a voice and that we want real change." 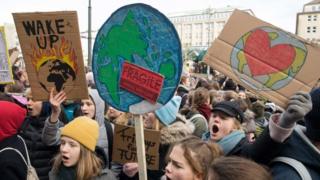 CHRISTIAN CHARISIUS
Pupils demonstrate with posters for climate protection in front of the city hall in Hamburg, northern Germany

"We often hear that (making changes) is too high a cost... it's unrealistic. But the climate doesn't wait... and we'll keep going until our politicians finally take action." 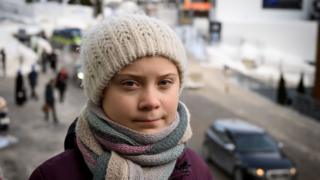 'We had to prove we went to Brussels'

While many of the young people marching had skipped school without permission, others have been told they are allowed to miss classes as long as it was for the protest.

Some schools ask pupils to take a selfie to prove they went to Brussels to protest.

Meanwhile, other schools asked permission from parents and organised it officially.

WHAT IS CLIMATE CHANGE?

"We came here today with the fifth and sixth graders", one protester said. "This is more of a school trip... our teacher organised it, so we're not skipping class."

The protests come at a time when there is a lot of focus on climate change policy and discussions between world leaders and businesses taking place at the World Economic Forum (WEF) in Davos, Switzerland.

Earlier this week broadcaster and natural historian Sir David Attenborough told Prince William that "we need to move beyond guilt or blame, and get on with the practical tasks at hand" to fix the planet.