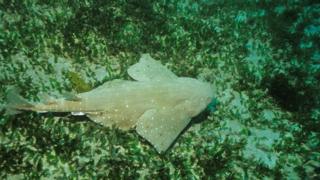 Scientists think they've found evidence that an endangered shark is swimming around the Welsh coast.

It's now thought to be one of the last strongholds of the angel shark, which are usually found in the Canary Islands (Spanish islands which are located off the coast of north west Africa).

Scientists are really worried that lots of species of sharks - including the angel shark - could soon become extinct because they're getting caught in the nets of fishermen.

As part of the 'Angel Shark Project: Wales', the Zoological Society of London, want people with old photos of the angel shark around Wales to come forward so they can track its journey.

What is an angel shark? 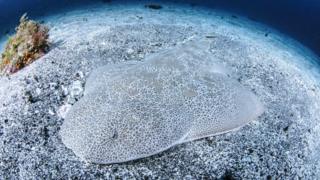 Getty Images
Can you spot the angel shark in this photo?

Angel sharks can grow up to about 2.5 metres in length. They are also known as monk or monkfish by fishermen.

They are not threatening to humans, living mainly on sand or mud at the bottom of the sea and they eat small fish and molluscs.

Even though there are 22 species of angel sharks, only a few thousand are thought to be still alive.

Most sharks are at the top of the food chain, which makes them crucial to the health of the oceans.

Losing them would have a big impact on other fish populations and eventually would affect humans.

Why are they endangered? 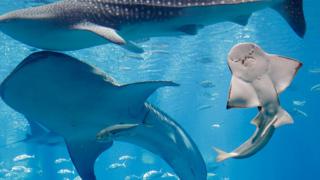 Angel sharks are endangered for a number of reasons, the main one being that they get caught up in fishermen's nets. Like other sharks, they are also suffering because the ocean is getting more polluted.

The Canary Islands is the only place in the world where you can see lots of angel sharks. It's mainly because using deep-sea fish nets is banned there.

Scientists are hoping new sightings in Wales might help them find new populations of angel sharks.

A shark thought to be 512-years-old is still alive