World's tallest moose statue: Who will be the winner? 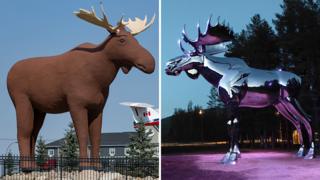 It's an argument that has made the people of Canada and Norway disagree, and it's all about the size of a moose statue. Yes, we said moose.

The two countries have locked horns in a battle to see which moose is bigger.

The unofficial title of "world's tallest moose statue" was snatched from a city called Moose Jaw, in Canada in 2015, when a sculpture 30 centimetres taller was erected in Norway.

Canadian locals only realised when resident Justin Reves set up a crowd funding campaign to take back the title for their statue called Mac.

He said: "The Norwegians deliberately and intentionally stole the title from us with the creation of 'Storelgen' - an ostentatious chrome moose made to be exactly 30 cm taller than Mac".

The city's tourism department says Mac is one of the most photographed roadside attractions in Canada and the mayor of Moose Jaw has even suggested putting skates on the statue!

I can't believe these statues are all made of butter!

Coronavirus: Sports day with a twist!

What books have you been reading?