Who is Stefanos Tsitsipas? 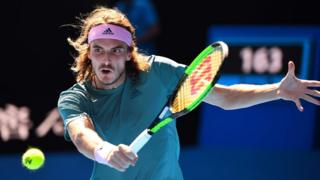 He beat Roberto Bautista Agut to continue his brilliant run, which included a victory over six-time champion Roger Federer in the previous round.

At 20 years and 168 days, Tsitsipas is the youngest man to reach the last four of a Grand Slam since Novak Djokovic in 2007.

He will face Spain's Rafael Nadal or American Frances Tiafoe next.

What is a Grand Slam?

Grand Slams are the most important competitions in tennis.

No Greek man had ever reached the world's top 100 until the then teenager cracked it in October 2017, never mind anywhere near his current ranking of 15. 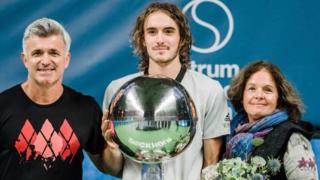 Born in Athens, Greece, Stefanos comes from a family that loves tennis.

His mum Julia, who's Russian, was a professional player and former world junior number one.

While his Greek dad, Apostolos, was trained as a tennis coach.

"My first memory is to be three and to hit balls with my father in the gap between lessons. I remember watching games on TV, as a baby, I can not tell you who was playing, but I remember watching," he said in an interview with Greek publication, Sport24. 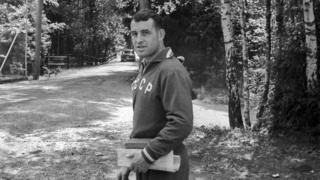 Stefanos is the eldest of four children. His three younger siblings Petros, Pavlos and Elizavet are also talented tennis players.

His grandad Sergei Salnikov was a successful sportsman too. He won an Olympic gold medal with the Soviet Union football team at the 1956 Olympics. 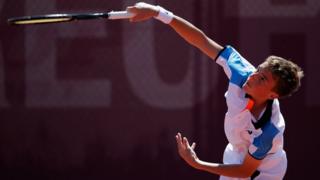 The young tennis star nearly drowned while swimming at a tournament in Crete.

His father helped to save his life after the water carried him away from the shore.

He said that the incident is the reason he has "zero fear" now on court. 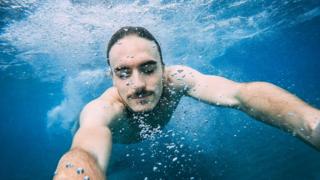 Twitter / @StefTsitsipas
Taking a quick selfie in the sea

As someone who travels the world playing sport, Stefanos posts a lot about the cool things he gets to do abroad.

He's recently visited the zoo in Australia, jetskiied in Cyprus, and got lost in China. 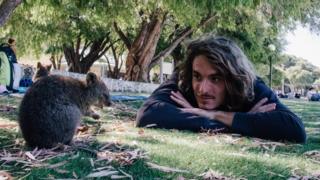 Twitter / @StefTsitsipas
He posted this photo during a visit to an Australian zoo: "One of the few animals that can smile to you."

Greek journalist Vicky Georgatou, who first met Stefanos as a teenager, told the BBC: "He's not like the other guys on their phones, playing games."

"He likes to take pictures, he likes to read, he's very different." 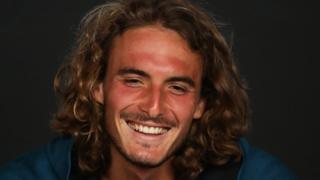 After his third-round win at the Australia Open in 2019, Tsitsipas admitted he did not have many friends in the locker room.

"I think I'm comfortable meeting new people and having a discussion with someone," he said when asked about his perceived shyness.

"Not many of the players want to be friends on the tour. That's a problem.

"But I would love to have more friends on tour." 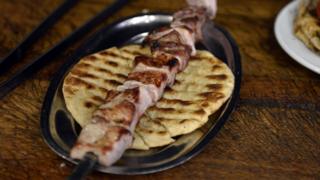 Stefanos's incredible run at this year's Australian Open in Melbourne has been supported by lots of Greek-Australians fans living in the city.

A Greek restaurant there has even promised to honour him with a special dish if he makes the final.

Stalactites wants to name a Souvlaki after him - a popular Greek dish made of small pieces of meat and sometimes vegetables grilled on a skewer.

"We'd love for him to choose what he'd like in his souvlaki and even if he wants to come and roll the first one, we'd love that too and we'd definitely put it on the menu for him," managing director Nicole Papasavas told Omnisport.

Watch: Serena Williams has awkward entrance onto tennis court in the Australian Open