Ant McPartlin returns to work on Britain's Got Talent 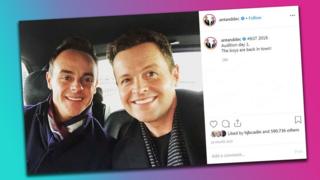 TV presenter Ant McPartlin has returned to work with his partner Dec, with the duo posting a picture of themselves on their first day back working together for almost a year.

It looked like the picture was taken in a car as they made their way to the London Palladium, where Britain's Got Talent auditions are now being filmed.

"Audition day 1. The boys are back in town!" the post said.

Guess who's performing at the Grammys this year?

How much do you know about Oti Mabuse?

Justin Bieber and Hailey Baldwin might be having a second wedding

Ant has not been in work since being banned from driving for 20 months and fined £86,000, due to his involvement in a car crash in March 2018 after drinking alcohol and driving.

In a letter that was read out in court, he said he was "ashamed and mortified" by what he had done.

It was reported in August that he would not be returning to his TV work until 2019.

At the end of last year, Ant posted a tweet from the presenting duo's joint account suggesting he was ready to get back in the studio.

BGT fans will see the pair back together when the show hits screens later this year on ITV.

But Ant and Dec's Saturday Night Takeaway will not be returning until next year.

Dec to present Saturday Night Takeaway by himself