Kumbh Mela: What is the Hindu festival?

Millions of people will bathe in India's sacred Ganges and Yamuna rivers as part of the Hindu festival of Kumbh Mela.

It's the biggest peaceful gathering in the world with over 120 million people expected over the next 49 days.

Hindus believe the water from the river will rid them of sin and save them from any future evil.

The location of the festival is chosen solely by the position of the sun, moon and Jupiter according to Hindu astrology.

What is Kumbh Mela? 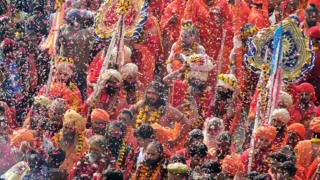 Getty Images
Devotees have been gathering in Allahabad for days

120 million Hindus and tourists will visit the north Indian city of Prayagraj over the next few weeks.

The festival is held at Sangam, the point at which India's two mega rivers, the Ganges and Yamuna, come together.

The festival moves between the four locations, with Prayagraj being the largest. The other locations are Haridwar, Nashik district, and Ujjain.

Kumbh Mela is held every 12 years. Every six years a half Khumb is held. The most recent full Kumbh was held in 2013 in Allahabad and over 100 million people visited. 2019's festival is a half Khumb. 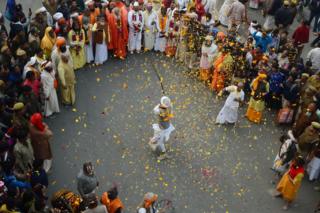 Prayagraj is chosen because it's supposed to be one of four places where the drops of eternal life were spilled from an urn being fought over by Hindu gods and demons.

People travel from all over India, in order to bathe in this symbolic water. In a lot of cases they have to wait a long time for the opportunity and only get to bathe for a few seconds.

It's really important because Hindus believe the water gets rid of any sin and helps them avoid evil in the future. Some also believe that the water can cure illness and disease.

The 'Sadhus' are the biggest attraction of the festival. They are very private Hindu holy men who normally live away from people in camps. They come to the festival to perform prayers, give blessings and lecture on Hindu teachings. 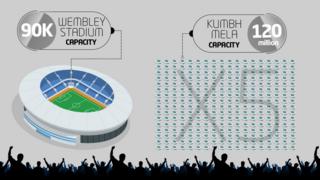 The number of people visiting the festival could fill Wembley stadium 1333 times.
How does it all happen? 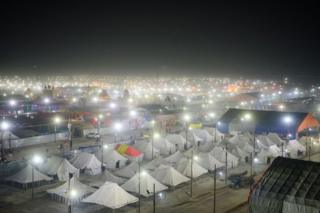 Getty Images
The budget for the festival is about $400m

The festival is built around the Ganges and Yamuna rivers so organisers have had to make a massive tent city for visitors.

Visitors can fly in, get the train or use the newly laid 300 kilometre road system to get to the festival.

When millions of people are involved you better hope the security is top notch. 30,000 police and security guards are suited and booted ready to greet the millions.

And if anyone gets ill, there are doctors on sight and 11 temporary hospitals to help them out.