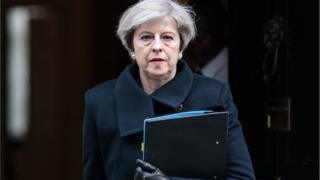 Getty Images
Prime Minister Theresa May's Brexit deal was rejected in a crushing defeat in the House of Commons, as 432 MPs voted against it. Labour leader Jeremy Corbyn has called for a vote of no confidence against the Prime Minister.

This was the deal that the Prime Minister negotiated to set out how Britain splits from the European Union on 29 March.

432 MPs voted against the Brexit deal, while 202 voted to support it.

It's the biggest defeat a government has faced in almost 100 years.

Labour leader, Jeremy Corbyn, has called for a no confidence vote against the Prime Minister.

What happens if Theresa May's deal is rejected?

This lets MPs decide whether they want the government to continue.

This evening they will vote on the motion: "That this House has no confidence in Her Majesty's Government.".

If Theresa May wins the vote she is allowed to stay as Prime Minister. She has told MPs that she would have a new version of the Brexit deal to show Parliament next week.

If the Prime Minister loses the vote it starts a 14-day countdown for the Conservatives to make changes to allow them to carry on; by changing their policies, appointing a new leader or making a deal with another party.

If during that time the current government or any other alternative government cannot win a new vote of confidence, then an early general election would be called.

This though wouldn't happen for at least 25 working days - that means days of the week, not including weekends.

Brexit: What happens if Theresa May's deal is rejected?