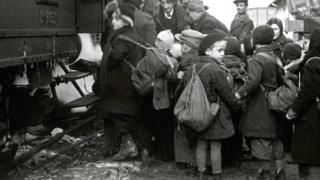 Getty Images
Thousands of children were transported to safety on the Kindertransport, ahead of World War Two

Kindertransport was the name given to the mission which took thousands of children to safety ahead of World War Two (1939-1945).

It helped 10,000 children to escape from Adolf Hitler's reign of terror in parts of Europe controlled by the Nazis.

It is called this as kinder means 'children' in German.

It was an extremely difficult experience for these children as they were told that they would need to leave their family and friends behind - and there was a chance they might never see them again. Their parents were not allowed to go with them.

Many had to learn a new language, as they didn't speak English, and lots of Jewish children were sent to live in non-Jewish households.

When was the Kindertransport?

The Kindertransport mission unfolded between November 1938 and September 1939, when World War Two broke out. 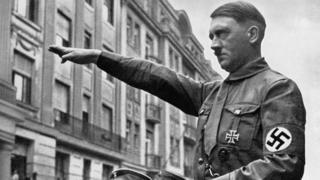 Getty Images
At the time, the Nazi party - led by Adolf Hitler (seen in this picture) - were in power in Germany

At the time, the Nazis were in power in Germany - and they were making life unbearable for Jewish people. Laws had been made which discriminated against them and many people were being murdered.

On 9 November 1938, there was a night of particularly terrible violence against Jewish people.

Ninety-one people murdered, 30,000 were arrested and sent to concentration camps, and 267 synagogues were destroyed.

It became known as Kristallnacht - the 'night of broken glass' - because there was lots of smashed glass all over the streets from shops that were raided.

Despite the Nazis' brutal regime, many countries had not wanted to take in such a great number of Jewish refugees to save them from what they were going through.

But after Kristallnacht, the British government agreed that some Jewish children under the age of 17 could temporarily come to Britain to safety.

Over the coming nine months, thousands were rescued.

The first Kindertransport from Berlin in Germany departed for the UK on 1 December 1938. 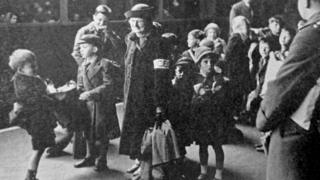 The first train from Vienna left on 10 December in the same year. When the German army entered Czechoslovakia in March 1939, trains were quickly arranged from here too, and transport also took children to safety from Poland in March and August 1939.

Who was rescued on Kindertransport?

Up to 10,000 youngsters from Germany, Austria Poland and Czechoslovakia arrived in the UK.

Children as young as five years old and up to the age of 17 were taken to safety.

Where did Kindertransport children go?

The government did not pay for the children to be looked after, though. Each child had to have a sponsor to do this. 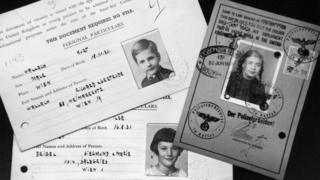 Getty Images
This picture shows the travel documents for three children who were brought to Britain from Austria to escape the Nazis
What happened after the war?

Many parents of children who had been rescued on Kindertransport were killed in the war.

So lots of children chose to stay in the UK and build new lives for themselves, as they had no family to go home to.

Others returned to their original home, while some rejoined their families who had resettled elsewhere, like in the US.

How do we remember the Kindertransport?

While the number of children rescued might not seem very high when you think that millions of Jewish people - including children - were killed by the Nazis, the story is a very important part of World War Two as it was a matter of life or death for the thousands who were rescued.

The children, grandchildren and great-grandchildren of those who were rescued wouldn't be here today if it wasn't for the mission which took these thousands of children to safety.

There is a statue at Liverpool Street Station in London, where the young refugees arrived 80 years ago.

Many survivors have talked about their experiences in order to help people to understand what it was like.