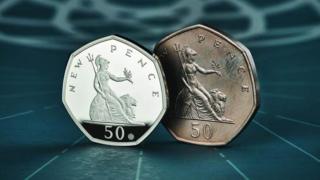 It's still one of the biggest coins and when it was introduced it was pretty unpopular - some critics called it a "monstrous piece of metal"!

But it has stood the test of time, having featured over 60 designs on its reverse. These have ranged from key political moments to major sporting achievements.

Test how much you know about your coins with our quiz below?

Why is the Royal Mint making jewellery instead of coins?

There are still 145 million £1 coins not returned

Believe it or not, the 50p was the world's first seven-sided coin and was brought in to replace the Bank of England 10 Shilling note. It was made to be easily distinguishable from round coins.

Designed by Christopher Ironside, its shape has been copied all over the world (with 3, 7, 9 and 11 sides) and the 20p coin was made in the same shape when it was introduced in 1982. 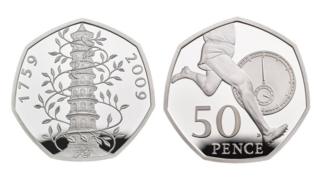 The latest commemorative versions of the coins mark events including Sir Roger Bannister running the first sub four-minute mile and the 250th anniversary of the founding of Kew Gardens in London.

The founding of the Scouts and Girl Guides is also celebrated in the set.

The coin celebrating the 250th anniversary of the founding of Kew depicts the gardens' Great Pagoda, which was completed in 1762 as a gift to Princess Augusta.

Dirty UK coins and banknotes covered in bacteria and germs