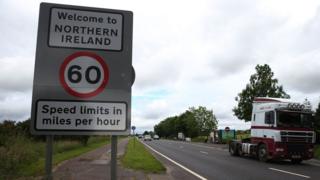 The Northern Irish backstop is an agreement about what the UK and the European Union (EU) might do to manage the border between Northern Ireland and the Republic of Ireland once Brexit has happened.

You might also hear it being called the Irish border backstop.

At the moment, the Irish border is an 'open border', meaning that people and goods can move very freely from one side to another. Sometimes, you might travel across this border and not even know you've moved from one country into the other!

But after Brexit that could change.

Northern Ireland has a 310-mile long border with the Republic of Ireland.

People cross this border every day - to go to work, visit friends and family, get to the shops or use leisure facilities. Trade is also made across this border, with companies taking goods to be sold on either side.

The border is also a sensitive issue because of the history of Northern Ireland and the agreements made to bring peace to that part of the UK, which included the removal of visible signs of the border.

It is easy for people to travel between the countries in this way because both Northern Ireland (as part of the UK) and the Republic of Ireland (a separate country) are currently both members of the EU.

But after Brexit, Northern Ireland (along with the rest of the UK) will no longer be a member of the EU, so this easy and free movement of people and goods across this border won't automatically be able to carry on in the same way.

The UK is due to leave the EU on 29 March 2019. Politicians are trying to decide how the border should be managed after this has happened.

What is a hard border?

There has been a lot of talk of the border between Northern Ireland and the Republic of Ireland possibly becoming a 'hard border'.

A hard border could mean that it would be controlled and protected by customs officials, police or military personnel. There could be cameras and barriers.

People could need to have their passports and cars checked to travel from one country to the other. 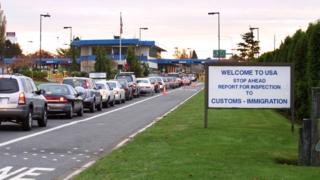 Journeys which are currently quick and easy could become much longer.

Lots of people - including politicians in both the UK and the EU - don't want this to happen. But they can't work out how the situation is going to work yet.

What is the Irish backstop?

The backstop is the fallback position - currently part of Theresa May's Brexit deal - which could see Northern Ireland continue to follow some of the rules as the Republic of Ireland and the rest of the EU, in order to keep the border more open.

Theresa May says she won't let that happen as it would separate Northern Ireland from the rest of the UK.

But lots of UK politicians say that even the idea of the backstop should not be in her deal at all.

Some of the strongest voices on this issue are Northern Irish politicians in the the Democratic Unionist Party, who Mrs May relies on to get her plans - like her Brexit deal - through Parliament.

They don't want Northern Ireland to be treated any differently to the rest of the UK when it comes to Brexit, which is what the backstop suggests could happen.

The Irish border issue remains a big part of the discussions - and disagreements - in Parliament, as nobody can agree how the border should be managed.

Both the UK and EU want to work out a future relationship deal that means the border can stay open or be managed in a different way.

At the moment, the detail of how that might work hasn't been agreed.

The Department of Education and Skills in the Republic of Ireland told Newsround that around 500 children cross the border for school every day. Over 360 of them travel from the Republic into Northern Ireland.

Those in charge of education on both sides of the border told Newsround that they are working to ensure children will still be able to travel across the border for school.