Anna Soubry: Why MPs have complained to police about pro-Brexit protestors 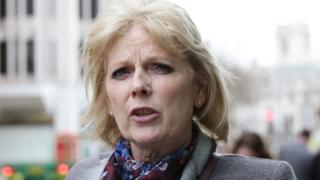 More than sixty MPs have written to the police to complain about what they say is a failure to protect them from intimidation, following an incident yesterday where protestors surrounded and shouted at the Conservative MP Anna Soubry.

Ms Soubry opposes Britain's exit from the EU and was targeted by Pro-Brexit protestors.

There was no violence, but a small group of protestors surrounded her and followed her down the street. Ms Soubry criticised police for not stepping in.

Officers are looking into whether any crimes have been committed. There have been no arrests at this stage.

Why is this important?

People living in the United Kingdom have the right to freedom of speech and are able to challenge politicians who might have different views to their own.

However, some MPs have spoken out to say that the protestors' behaviour crossed a line.

Labour MP Jess Phillips, said "people deserve to be safe at work. I didn't come here to be bullied by far-right bullies, far-left bullies, or anyone, we came here to do what we felt was best."

But Brexit Secretary Stephen Barclay, who is a senior member of the government, said "there is a balance always to be struck between defending the right of freedom of speech and ensuring that there are boundaries around that,"

He said the "appalling scenes" outside Parliament, showed how divisive the Brexit process had been.

Downing Street said the incident was "unacceptable" and MPs "should be free to do their jobs without any form of intimidation".

Our role is to facilitate peaceful protest and balance the needs and rights of all those present, including protestors, MPs and members of the public.

Why are some people worried?

Some MPs have said this is not an one off incident, and have referred to the murder of MP Jo Cox, who was killed in her West Yorkshire constituency by right-wing extremist Thomas Mair in June 2016.

They fear that politicians are facing increasingly intimidating behaviour from the public.

If anything in this story has upset you, then you can check out our guide here.