What is a bee brick? How can it help? 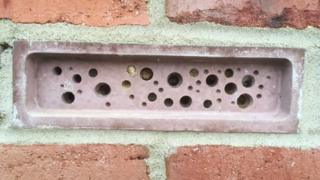 Adam Cormack fitted his house with a special brick in which bees can live - and he is pleased to report that some bees have moved in!

In a post on Twitter, he said: "6 months ago a bee brick was fitted to the side of our house. Today I went up a ladder to check on it and - yes! - we have some bees. A feature for all new build houses? 🐝"

The bricks are made for solitary bees, which don't live in hives or produce honey. They are important to the planet as their pollination helps to create a huge amount of the food that we eat.

Their numbers are in decline for many reasons, including loss of their natural habitat. So the idea is that the bricks give these bees somewhere to live, create their nests and - for the females - lay eggs.

Some people have criticised bee bricks saying that including bee homes within the structure of our buildings is not a solution to the problem, as we should be leaving them with more natural habitat in the first place.

Why is the bee a symbol of Manchester?

What is the Great British Bee Count?

Thousands of bees take over car!