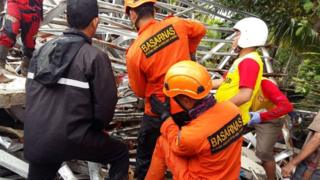 Scientists are getting a better understanding of the causes behind a tsunami in Indonesia, which happened over the weekend.

The tsunami hit towns and beaches on the Sunda Strait, including several popular tourist destinations, between the islands of Java and Sumatra.

Roads were damaged and hundreds of buildings were destroyed. Emergency services are working hard to clear debris, as well as find and help people.

What is a tsunami?

Indonesia's disaster agency says more than 400 people have lost their lives, while around 20 are still missing and many thousands have either lost or had to flee from their homes.

Why did the tsunami happen?

Officials think the Indonesian tsunami was caused by an undersea landslide, caused by the eruption of a nearby volcano called Anak Krakatau.

Anak Krakatau is a new island which emerged from Krakatoa volcano in 1927. Its name means 'Child of Krakatoa'. When Krakatoa volano erupted in 1883 it was one of the most violent ever recorded.

Indonesia's geologic agency said that the volcano erupted for two minutes and 12 seconds on Friday, creating an ash cloud that rose 400 metres above the mountain.

But researchers believe that the volcano has lost more than two-thirds of its height and volume during the past week.

According to the Centre of Volcanology and Geological Hazard Mitigation, the cone of the volcano used to be 340m high, but it is now just 110m tall.

This is because during the eruption, a large amount of the volcano basically fell off into the sea, which is what is thought to have caused the tsunami wave.

JAXA
This picture by the Japanese Alos-2 radar satellite, which is also being used to monitor Anak Krakatau, shows how the shape and size of the volcano has changed since the eruption

Indonesia sits in an area called the Pacific Ring of Fire, which means there is a constant risk of natural disasters, such as tsunamis, volcanic eruptions and earthquakes.

In September a powerful earthquake struck just off the central Indonesian island of Sulawesi. It set off a tsunami that engulfed the coastal city of Palu.

Fears that another tsunami could hit have faded, but there are worries that the volcano could erupt again. 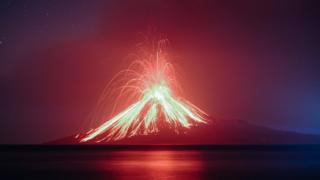 The alert level has been raised to the second-highest level possible.

All flights around the volcano have had to change their routes and a 5km (three-mile) exclusion zone has also been imposed.

What is a tsunami and why do they happen?