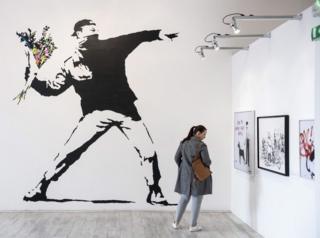 Banksy is a famous - but anonymous - British graffiti artist. He keeps his identity a secret.

He produces pieces of work which pop up in public places, such as on the walls of buildings.

A lot of his art is done in a particular style which people can easily recognise.

Why are people saying these works of art are 'stolen'?

Check out these amazing miniature masterpieces 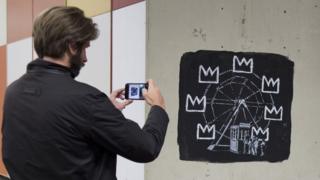 Press Association
This piece appeared in London towards the end of last year
Who is Banksy?

He began spray-painting trains and walls in his home city of Bristol in the early 1990s. Bristol is well known for its colourful street art and graffiti.

But in the 2000s, he expanded his work beyond Bristol and was soon leaving his artistic mark all over the world.

Graffiti is one of the few tools you have if you have almost nothing.

He quickly became well known as an artist who would poke fun at big companies and send political messages through his work.

Why does no one know who Banksy is?

His identity is unknown, despite lots of people trying to guess who he is.

In 2008 the newspaper, The Mail on Sunday revealed who they thought he was. 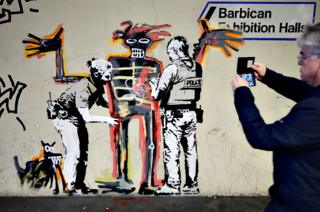 But despite rumours about who he might be, Banksy's true identity has never been revealed.

If you want to say something and have people listen, then you have to wear a mask.

What is Banksy's style?

Banksy was heavily influenced in his early days by a French graffiti artist called Blek le Rat. Not only did this artist inspire Banksy politically, but Banksy was also inspired by his use of stencils.

Banksy took on this visual style for himself and, to this day, uses stencils to do a lot of his work. 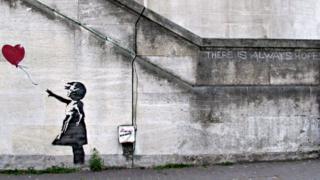 Banksy
This piece of a girl letting go of a heart-shaped balloon is one of Banksy's most famous artworks. It was created using a stencil and originally painted onto the wall of a printing shop in Shoreditch in London in 2002. In 2017, it was voted the nation's favourite artwork

This allows him to create his paintings with great detail in a short amount of time - and has also helped him to remain anonymous.

Why is Banksy controversial?

His artwork can be rebellious and is known for delivering political messages.

There are lots of people who love what he does, paying many thousands of pounds for it and considering it to be incredible art. 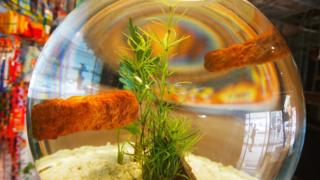 Getty Images
He has also done installation work, such as this piece called 'Fish Sticks' from an installation in New York in America. An installation is when an artist builds or constructs works of art in a particular space to make a special exhibition there

But there are others who don't support what he does and consider it to be vandalism.

Some of his graffiti has been painted over soon after it appears.

There is a debate about why Banksy's work can be protected as 'art' when other graffiti artists are prosecuted and sometimes even put in prison for doing the same thing. 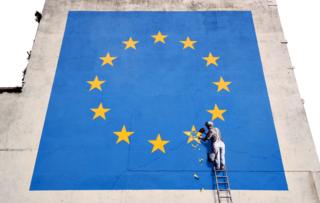 Press Association
In May 2017, a mural showing a workman chipping away at one of the EU flag's stars appeared at the ferry port in Dover. It is believed to be the work of Banksy

Some of his work is also controversial because of what he does with it.

At an exhibition of his work in London in 2005, he released 200 live rats in the gallery. Rats are a common theme in his work.

How much does Banksy's work cost?

Banksy was enough of an artistic celebrity by the early 2000s that his work would sell for a lot of money.

In an auction in 2008, a piece of work called Keep It Spotless was sold for just over £1 million.

In the same year, a mobile home that had a piece of Banksy artwork on it was given a £500,000 price tag. This was all because of the artwork that it had on the side. 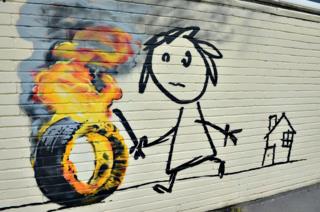 Press Association
This picture appeared on the side of a classroom at a primary school in Bristol during half-term in June 2016. It turned out to be the work of Banksy

When Banksy leaves his artwork on buildings, there can sometimes be arguments about who owns the pieces and what should be done with them, as they are very valuable.

Sometimes people want to sell them to raise money for a cause, while others think the works should be left to be enjoyed by others.

Banksy artwork worth £1 million shreds itself after an auction