America's Got Talent star Courtney Hadwin's got a record contract 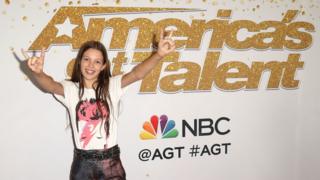 She might not have won the America's Got Talent title, but it certainly doesn't look like we'll be seeing the last of Courtney Hadwin.

The 14-year-old singer from County Durham has just signed a record contract with Arista Records and Simon Cowell's label Syco.

She revealed the news on social media, writing: "So excited to finally say that I have signed a record deal with @syco & @aristarecords thank you so much this wouldn't be possible without all your support #dreamsdocometrue now let's make music". 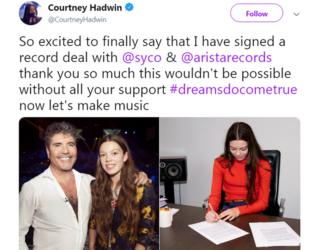 It certainly looks like she's been keeping busy since she left the show back in September.

At the beginning of November Courtney's posted pictures of her performances in Las Vegas as part of AGT Live! - the America's Got Talent spin off live show.

On 30 November she also revealed she'd be appearing on reality TV show 'America's Got Talent: The Champions' in January 2019.

Fans have already been asking when they can expect an album, but so far Courtney hasn't revealed any more details.

But it certainly sounds like 2019 could be a big year for the singing sensation.

What music would you like to see Courtney releasing? Let us know in the comments.