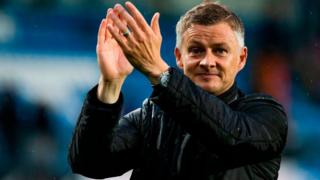 On Tuesday the club sacked Jose Mourinho as manager after two and a half years in charge at Old Trafford.

The Premier League club appeared to make the announcement about his replacement by mistake on their website on Tuesday evening, but the page was later deleted.

A video posted on the team's official website on Tuesday evening featured Solskjaer scoring the winner in the Champions League final against Bayern Munich in 1999.

It was captioned: "Solskjaer becomes our interim manager, 20 seasons after clinching the Treble with THAT goal at Camp Nou..." 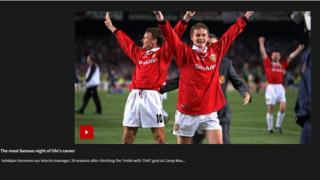 United, who are sixth in the Premier League, will look to appoint a permanent boss at the end of the season.

Solskjaer's first game in charge of United will be against Cardiff City on Saturday - he was relegated from the Premier League with the Bluebirds during an eight-month spell as manager in 2014.

"Manchester United is in my heart and it's brilliant to be coming back in this role. I'm really looking forward to working with the very talented squad we have, the staff and everyone at the club," said Solskjær.

Following the news that Mourinho would be leaving the club United released a statement saying: "A caretaker-manager will be appointed until the end of the season while the club conducts a thorough recruitment process for a new, full-time manager."

It had already been confirmed the new manager would not be current assistant manager Michael Carrick, academy boss Nicky Butt, or former Arsenal boss Arsene Wenger.

Who is Ole Gunnar Solskjaer? 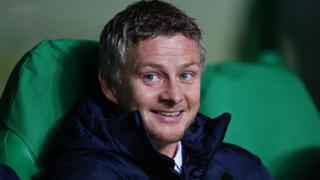 Solskjaer is a former Manchester United player who scored 126 goals for United in 11 seasons at Old Trafford.

He currently manages Norwegian side Molde but their 2018 season has finished for the winter and does not restart until March.

The former Norway international will temporarily take over the manager job, and will have ex-United coach Mike Phelan as his assistant.

Why was Jose Mourinho sacked? 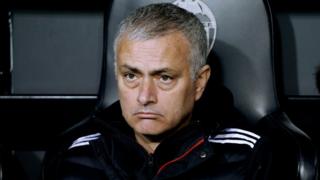 The 55-year-old manager guided United to League Cup and Europa League titles, after taking over from Louis van Gaal in May 2016.

But they are sixth in the Premier League, 19 points behind leaders Liverpool, who beat them 3-1 on Sunday.

No way Jose! Did Mourinho actually say that or not?

Manchester United mocked for saying 'not a cellphone in sight' - when there is!

Pogba v Mourinho. Who do you think is right?

Ever wanted to see the inside of a planet?