Common crane: The UK's biggest bird is making a comeback 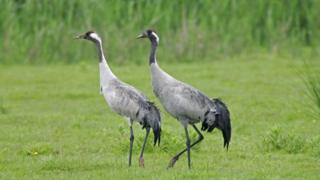 Andy Hay (rspb-images.com)
The common crane has enjoyed its best year in the UK since the 17th Century.

Ever heard of the common crane? It's the UK's tallest bird and it's making a comeback.

Figures released by the RSPB reveal that 2018 has been the most successful year for this stunning bird.

A record 54 pairs produced 25 chicks, bringing the national total population to around 180 birds.

This is its highest number since cranes returned to the UK in 1979 after an absence of more than 400 years! 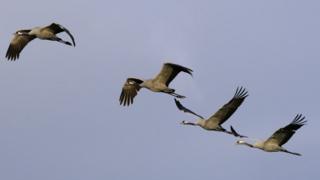 It's the tallest bird in the UK, standing at a height of 120 cm.

Cranes are mainly grey and have long legs, a long neck and drooping, curved tail feathers.

Wild cranes were once a widespread breeding species before they became extinct through hunting and the loss of their wetland habitat around the 1600s.

"To see them starting to spread back across the country after all this time is just brilliant."

In 1979, a small number of wild cranes returned to the UK and established themselves in an area of the Norfolk Broads.

In 2010, the Great Crane Project - a partnership between the RSPB, WWT and the Pensthorpe Conservation Trust - set out to help this small population of birds.

By creating and improving existing habitat and carefully hand-rearing young birds, the project aimed to restore healthy numbers of wild cranes throughout the UK by releasing them on the Somerset Levels and Moors.

This stunning bird now breeds in England, Scotland and Wales, with most of the population found in the Norfolk Broads, East Anglian Fens, Somerset Levels and Gloucestershire.

The pastel rainbow pigeon and some of world's most beautiful birds

Thousands of birds fly together in amazing murmuration